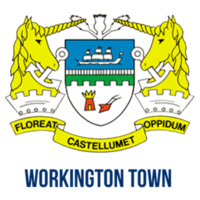 Despite a gallant fightback in the second half, Hunslet Hawks were beaten by three tries in five minutes for Workington Town at the end of the first half.

This second round match in the Kingstone Press Championship Shield at South Leeds Stadium might have been Hunslet’s last real chance to avoid relegation at the end of the season.

The game started ominously for the Hawks as Workington quickly put points on the board when Carter scored for Workington. However they steadied the ship and took the lead on 20 minutes when Grimshaw followed Brown’s chip kick to touch down near the posts. Brown duly kicked the extras and Hunslet were ahead 6-4.

However things went wrong five minutes from half time as Workington ran in three tries in quick succession to take a commanding lead.

First Akehurst scored, converted by Sammut. Then Forber almost scored, but was held up. After another dropped kick, Brett Phillips scored and Forber converted. Another kick forward by Sammut was collected by Whiteley who went over and again Forber scored the extras.

Three tries in five minutes meant Workington went into half time 6-22 ahead.

Hunslet fans must have been disheartened after a series of second half collapses this season, but the Hawks put on a solid display and almost overturned the deficit.

The fightback started when Barnett intercepted a pass and ran 90m to score. Brown’s conversion brought the score to 12-22.

Barnett scored again, this time in the corner following a kick on the last tackle by Ansell. Brown kicked the extras from close to the touchline and Hunslet were now four points behind with fifteen minutes to go in the match.

The game finished with great pressure from the Hawks, but Workington’s defence stood firm to see out the game and gain their fifth successive win.

Hunslet Hawks remain rooted in the relegation places and are four points adrift of Batley Bulldogs. Next week Hunslet travel to London to take on the Broncos.