Hunslet fell short in the final match of the season and the last as the ‘Hawks’ against Rochdale Hornets at the Crown Oil Arena, losing 34-18.

The first half started perfectly for Rochdale and continued that way for them to post a 16 point lead through three tries. The score stayed at 16-0 for the rest of a bad- tempered half as 5 sin binnings saw Hunslet down to 11 men and Rochdale to 10 for part of the game. 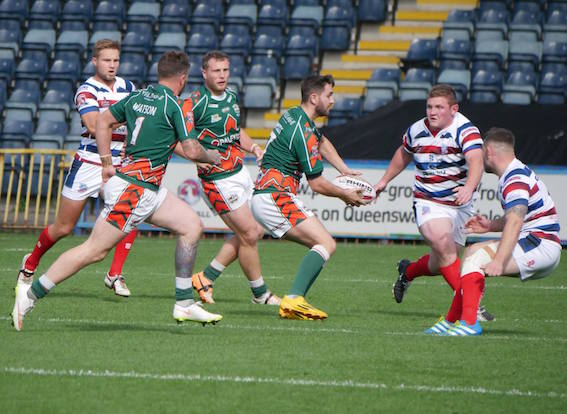 The second period was more evenly contested, Hunslet looking at one point like making up the deficit. Tries for Danny Ansell, Jack Lee and Richie Barnett meant Hunslet trailed by just 6 points half way through the second stanza before a Samir Tahraoui try turned the tide. A strong period near to the end of the match gave Rochdale the win before a consolation try from Danny Ansell saw Hunslet bow out in style.

Hunslet didn’t start the game well, letting Rochdale in for a try after just 2 minutes, Dave Cookson opening the scoring. They furthered their lead through a strong run by Ryan Maneely to put Hunslet 12 points adrift after around fifteen minutes.

Hunslet came agonisingly close to halving the difference in the 20th minute but solid Rochdale defence shut down an excellent passing movement from the visitors. And the Hornets built on their earlier defensive efforts, scoring a couple of minutes after both Samir Tahrouai of Rochdale and Daniel Williams of Hunslet were sinbinned following a minor fracas. It was Chris Riley who went over, after smart build up play made the space for him to dart over.

With tensions rising and the match in danger of running out of control another two yellow cards came out for Lewis Galbrath (Hornets) and Matt Carbutt (Hawks) and then another for Cameron Heap of Rochdale a couple of minutes later.

So ended the first half, with the score heavily out of favour of the Hawks at 16-0.

Hunslet didn’t start the second half much better than the first, again letting in a try after just 2 minutes for David Crook to make it 22-0.

Hunslet struck back when a great dummy by Danny Ansell led him to post the first points of the game for the Hawks. And not long after on 52 minutes Jack Lee scored another try for the Hawks, scooting over close to the line to make it 22-12. Hunslet kept on delivering, a smart long pass sending Richie Barnett over after a great 40-20 kick by Danny Ansell gave the Hawks great field position.

But just as Hunslet looked as though they could go kick on to win the match, Rochdale hit back with a try from Samir Tahrouai, making the gap 4 points bigger and a win for the Hawks less likely. And if their were any doubts on who would come out victors, they were quickly ruled out as a pass 20 metres out in the 65th minute put former Super League player Chris Riley clean through to score his brace.

A fine try not long after by Lewis Galbrath furthered the lead to make the score 34-14. But Hunslet restored some pride in the last minute, Danny Ansell running nearly the length of the pitch with an interception try.

A spirited effort from the Hawks ended in defeat in the last game of the 2016 season, but the teams performances, especially in the closing games of the campaign, provides much promise for 2017.