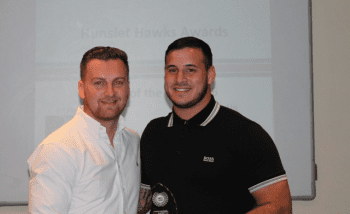 Supporters turned out in force in anticipation of who would be crowned the last ever Hunslet Hawks Player of the Year.

After showing a superbly put together season highlights video, the evenings presentations began.

Geoff Creswick picked up the Gavin Stewart Memorial award for his volunteering efforts as well as running the Supporters bus to away games in 2016.

Jimmy Watson won the Joan and Ronnie Fletcher award with Richie Barnett picking up Top Try Scorer of the Season award after an impressive 17 tries.

Top Tackler of the Year went to Daniel Williams who had a great first season at the club.

Club Person of the Year went to Peter Todd, great recognition for all the hard work that Peter has put into the club over the last several years. Club Chairman Neil Hampshire summed up the meaning of the award when he said “The club wouldn’t be here without him”.

Lewis Reed and Danny Ansell picked up the Most Improved Player of the Year award.

Jake Normington was then presented with the last ever Hunslet Hawks Player of the Year award, a fantastic achievement for Jake in his first full season for the club.