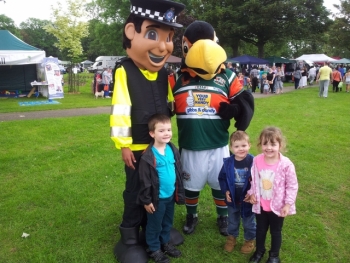 Barry held a training session with both teams before the Beeston Broncos match with Emley Moor.  It certainly paid off with both sides giving a good account of themselves in front of a big crowd in Cross Flatts Park. The South Leeds side running out eventual winners.

Phil Goodfield, the Broncos secretary, commented “Thanks to Barry, Martin, Phil, Simon and Harry the Hawk, and to the Hawks fans who came to watch the game – I reckon there were over 100 people watching the game which was great! The Hawks involvement and assistance certainly enhanced the day, especially for the kids, and is, as always, greatly appreciated by our club”.

Harry the Hawk was as popular as ever with young and old alike. Although in demand he still found time to chat with club patron Hilary Benn and his old friend the Lord Mayor of Leeds.

Harry and the community team are extra busy this coming weekend as they will be in attendance at both the Hunslet Gala and Middleton Family Sports Day. Pop along and say hello.