Beeston Broncos u13s won a closely fought Yorkshire Juniors Continuation Cup Semi Final last Saturday morning, a win which means that they will now take their place in the first ever Cup Final a Broncos team has contested in their short history. They will face Keighley Albion in the final on Saturday 25 June, kicking off at 11:30, at the Bigfellas Stadium – the home of Championship club Featherstone Rovers.

Their opponents in the semi final were North Derbyshire Chargers, the match being played in Warsop Vale, an old mining village between Worksop and Mansfield. The closely fought contest could have gone either way with Beeston first building up a 12 point lead, then the Chargers fighting back to within two points of the South Leeds side, for the Broncos to pull away towards the end of the game for a final winning margin of 8 points – final score 34pts to 26.  Joy and relief were emotions felt in equal part by the team, coaches and supporters as the referee blew the final whistle and the celebrations began!

The club, who have recently moved into their new pitch side facilities located behind Lane End Primary School at the bottom of Beeston Road (where South Leeds Sports Centre used to be), are now gearing up for the final, coaches and players putting in the hard work which will hopefully lead to victory on the day

They are also reaching out to members and supporters new and old, young and not so young to come and support the boys in the Final. If you’re reading this and have not had an invite please do come along and support your Beeston community rugby league club. You’ll be very welcome! 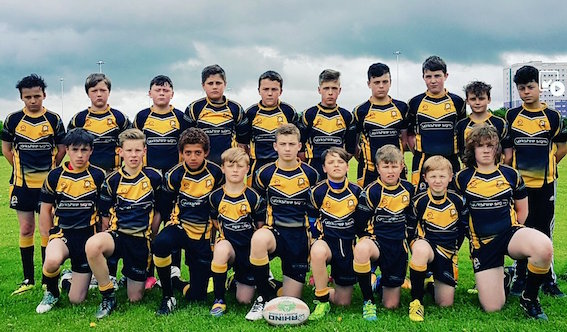 Other local junior teams have also reached their respective finals:

Friday’s Q&A with Board members and Head Coach Alan Kilshaw started with an update from Strategy and Planning Director Neil Hampshire on the IMG consultation and potential investment in South Leeds Stadium. More detail below 👇 ... See MoreSee Less

Friday’s Q&A with Board members and Head Coach Alan Kilshaw started with an update from Strategy and Planning Director Neil Hampshire on the IMG consultation and potential investment in South Leeds ...
View on Facebook
· Share