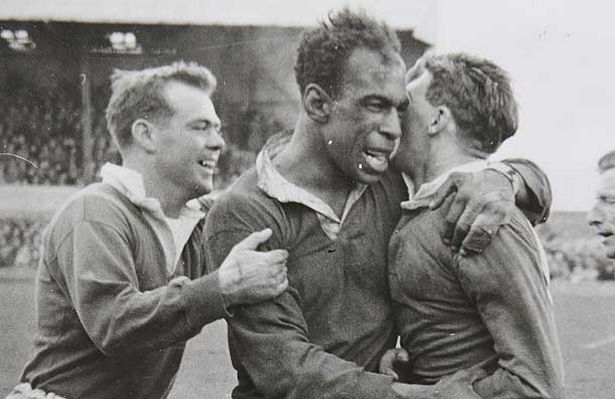 Hunslet, who are proud of the fact that they were the first professional Rugby League club to field a black man when they signed American Lucius Banks in 1912, believe that they may also have fielded the second black player.

Cec Thompson put pen to paper with Hunslet in May 1948 after impressing in one of the annual workshops competitions held at Parkside. He had never played Rugby League before but went on to carve out a fine career, earning Great Britain honours while at Hunslet when he was twice selected against New Zealand in 1951. In so doing he may have been the first black man in the United Kingdom to represent his country in a major sport.

He transferred to Workington Town in 1953, where he enjoyed continued success.

Being a Hunslet player had given Thompson the confidence and incentive to transform his life off the field. An illiterate orphan when he joined the club, he not only taught himself to read and write but went on to become a university lecturer, in addition to running a very successful business.

Cec Thompson, whose remarkable life is movingly chronicled in his biography `Born on the wrong side’, remained an active member of the Hunslet RL Ex-Parkside Former Players’ Association until his death in July 2011; he had celebrated his 85th birthday earlier that month.

Hunslet would be interested to know whether any other clubs signed any black players in the years between 1913, when the Parksiders last fielded Lucius Banks, and 1949, when Cec Thompson made his debut. One notable contender could have been the legendary George Nepia, the New Zealand rugby union international who joined the London club Streatham & Mitcham in 1935. Nepia, however, was a Maori, not black.