Broncos fight back just falls short in first ever Final 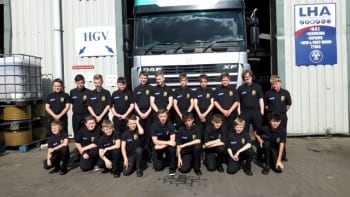 Beeston Broncos were defeated by Keighley Albion in the Yorkshire Juniors Continuation Cup Final last Saturday at Featherstone Rovers’ Bigfellas Stadium. Trailing by 20 points to 4 at half time to a powerful Keighley side the Broncos showed great spirit and skills to fight back magnificently in the second half scoring three tries to one, only to lose out by 24 points to 16 at the final whistle.

The club, parents  and new sponsors LHA Car and Commercial Vehicles of Rothwell are all very proud of the effort put in by the whole team in the club’s first final outing – the boys and coaches coming away with a determination to work hard with the aim of making more cup final appearances in the future!

The boys are pictured at the premises of new sponsors LHA Car and Commercial Vehicles, Rothwell, Leeds on the morning of the Final.