Brooke’s Career Progresses On & Off The Field 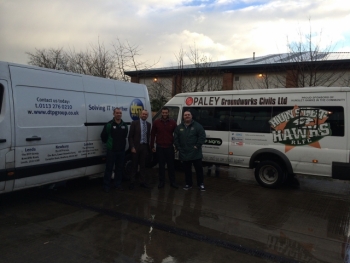 Brooke, brother of Huddersfield Giants Jodie Broughton, has moved to Hunslet Hawks for the 2014 season following spells with Warrington and York. Brooke left the Wolves after the U20’s competition was disbanded and, following an eye catching season with York, wasted no time in coming home for 2014 and combining the on field challenges with local IT Business DTP Group on a Business Administration training program. Jodie has successfully combined playing with working to qualify as a quantity surveyor in parallel. Few young men involved in sport show the kind of dedication to their own lives as well as their sporting careers.

The program, delivered through the Progress Me pathway, is the latest in a long line of placements of sporting backgrounds in modern business roles. Speaking for Progress Me, Ben Parker, co-founder, confirmed that there are opportunities nationally, including Leeds, Castleford, Central London, Manchester to name a few, for young people with the desire to succeed and urged all apprentice eligible people (aged 16-23), involved in or outside sport, to get involved and make contact at either www.ProgressMe.co.uk or with a simple CV/Email to info@progressme.co.uk.

Ben said “Our relationship with the Hawks typifies what we are trying to do in terms of using local business contacts to grow the pathways and options for players and fans alike who might otherwise be lost to sport.”

Brooke is placed with The DTP Group, an IT infrastructure and solutions specialist based in Leeds, working with some of the largest of the UK’s businesses and Public Sector organisations.  Now in their 28th year of trading DTP Group have been operating within Leeds for their entire trading history. DTP is committed to working locally with ambitious young people to grow their business. For more details on DTP visit www.dtpgroup.co.uk.

On the placement, Darren Williams, Director of Rugby for Hunslet Hawks said “We were keen on signing Brooke for the key 2014 season after he impressed against us for York last season. In the Championship, on the field is just one aspect of player welfare and the opportunity in conjunction with Progress Me to have Brooke the player settled with his local club, but also to have him working locally with DTP Group and working for his family’s future off the field is a great arrangement for all concerned, it is really showing in Brooke’s rugby. We hope this partnership will encourage more businesses to support their local clubs to build the sporting communities around their own towns”.