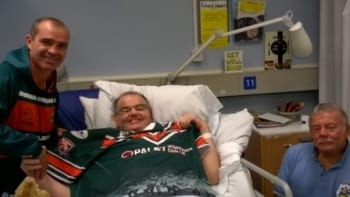 Dickie Walworth, a long-standing Hunslet fan, has not been too well recently and so Hawks Head Coach, Barry Eaton, went along to St James’ hospital to make a surprise visit.  Barry took with him a Hawks shirt, signed by all the squad, which was received very gratefully.

When asked who is the best Hunslet player that he had seen, Dickie had no hesitation in saying Graham King, but he had to think a bit longer about the best game, before nominating the semi-final victory over Widnes.

Dickie is a friend and also playing colleague (wheelchair rugby) of Malcolm Kielty of Halifax RL and it was Malcolm who had alerted the club to Dickie’s plight.  Another friend and playing colleague, Dave Heatherill, was also visiting when Barry called in.  Dave is a Fartown fan (Huddersfield RL, for you younger readers) and so plenty of stories were swapped.

The picture shows Barry, Dickie and Dave along with the signed shirt.