Does Hunslet Hawks have the UK’s biggest Rugby League Fan? 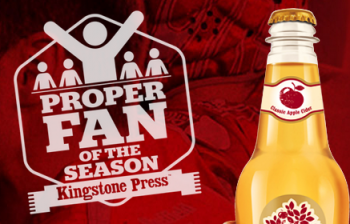 Do you loyally stand by Hunslet Hawks; never miss a game, volunteer at matches, would do anything for the team or are you simply just a die-hard Rugby League fan?  Then we want to hear from you!  To be in with a chance of winning this honoured title and amazing prize, simply nominate yourself via the entry forms at the club or online at www.kingstonepress.co.uk or www.facebook.com/kingstonepresscider.  And if you are feeling generous you can also nominate a mate who you think deserves the title!

The deadline for nominations is midnight on 29th August.  After which a judging panel, made up of representatives from the RFL, Kingstone Press and industry officials, will select ten finalists who will be given VIP tickets to Championships Finals Day.  During Finals Day the ten candidates will have the opportunity to tell the judges why they think they are the country’s biggest Rugby League supporter.  One devoted individual will then be revealed as Kingstone Press’s Proper Fan of the Season, and will win the chance of a lifetime to see England play Australia during the Four Nations, in Melbourne.

Glen Friel, sales and marketing director at Kingstone Press, said: “As sponsors of the Championships, National Conference League and as an official partner of the England Rugby League Team, we know just how passionate fans of the sport are.

“Rugby League is an incredible game with proper supporters who are committed to the sport and we want to find out which fan, and which team has true Rugby League spirit.  We want to not only take the opportunity to reward the loyalty of the fans, but also to help show why the sport is so popular up and down the country.”

For more information or details on how to nominate visit the website www.kingstonepress.co.uk, Facebook page www.facebook.com/kingstonepresscider  or look for the posters in your local club.

For more information on Kingstone Press’s activity with the Rugby League and for more Rugby League related competitions visit the Facebook www.facebook.com/kingstonepresscider or Twitter  www.twitter.com/KingstoneCider pages.