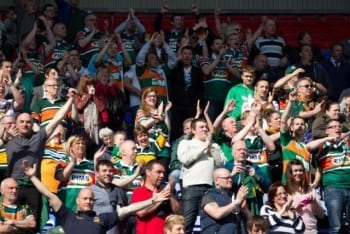 Phil Hodgson was joined by 13 fans and a number of topics were covered:

•Phil gave an update on the RFL and Club investigation into the smoke bomb incident at the Batley game.  Due to the fact the supporter originally identified as releasing the smoke bomb was able to bring 3rd party evidence to the contrary the Club rescinded the 6th month ban.  Phil pointed out that in the absence of cctv or a positive identification from a Batley official it was difficult prove the case against any supporter.  In the absence of such evidence the Club were now asking for the perpetrator to come forward.   The Club have informed the RFL of the investigation to date and now await the RFL decision in terms of any action to be taken against the Club.

•The plans to launch a monthly magazine next season to replace the match day programme were discussed.  This was well received by the group who came up with a variety of ideas for articles and features.  Having different contributors to the magazine was seen as a good way of ensuring there was something for everyone as well as getting supporters more involved with the Club.

•Details of the home shirt competition were relayed as well as plans for two launch nights in the Phoenix.  The group asked for better notice of such events going forward.

Dates for the event have now been confirmed as:

•The group then discussed a number of ideas for improving the match day experience.

•Bottle bar in the Phoenix to reduce queuing time;

•Seating outside the Phoenix;

•BBQ outside the Phoenix in the summer;

•The top tier bar to remain open during the second half of games;

•Something for the kids e.g. face painting, bouncy castle.

The group felt it was unnecessary for Barry to speak after every game, especially when emotions can still be running high.  They did, however, feel the player presentations should remain and asked that a platform be used to ensure everyone in the bar could see proceedings.

Other items covered on the evening included how to make better use of the Phoenix on non-match days, merchandise and raising the Club’s profile in the community.

Phil commented “I’ve been really pleased with the two meetings held so far and the enthusiasm from the group is really appreciated. A lot of ideas have been put forward which I’ll be discussing with the Board and wherever possible looking to put into action.”

“The turnout was brilliant for a Monday evening and I think Prycie was even happier than me. The group is keen to meet at different venues to help promote the Club and the next gathering is planned for the Broadway on Dewsbury Road on Wednesday 18th January 7pm”.

The fans panel is open to all supporters so please feel free to come along and chat about all things Hunslet.