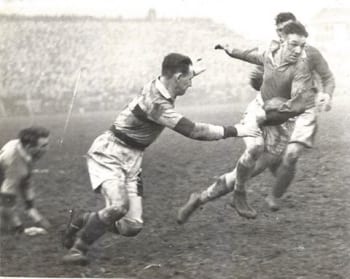 The club is saddened to hear that Hunslet legend Frank “Shanks” Watson has passed away at the age of 93.

At 5ft 8ins and 10st 10lbs, the whippy Hunslet Schools’ player began his Hunslet RL career at the age of 17 when he signed for the Parksiders in September 1940. In his ten years with Hunslet, mainly at scrum half or half back, he played 246 times, scoring 57 tries and one goal.

Frank was famously called up for a Great Britain trial in 1946, he worked a night shift as a bus conductor, rushed to Central Park, Wigan, to play in the match, then returned straight to Leeds to go back on another all-night shift.

He grew up in Hunslet and attended Hunslet National School and lived in Church Street before slum clearance took his family to Windmill Road in Belle Isle. From there he would go to training before going on to his night shift for the council. When he became old enough for conscription into the army during the war, his call-up was deferred as his mother had to cope with the illness of his three brothers due to the debilitating disease, Muscular Dystrophy.

When Hunslet shut down for the 1942-3 season, Frank guested with York before returning for the 1943-4 season where he was making a name for himself as a “sound and competent” player.  By the late 40s he was playing for Yorkshire and in October 1947 had played in the match when Hunslet beat the touring New Zealanders, 18 – 10. Still playing well and only 27, he was stunned to discover in September 1949 that Leeds wanted him and that Hunslet had put up no objections and 3 days later, on Saturday, 1 Oct, Shanks pulled on the colours of Leeds and ran out onto the Hunslet pitch to help beat his old team 21 – 13. Not only did he not want to leave Hunslet, it seemed that most of the fans didn’t want him to leave and there were reports of angry protests against the Hunslet directors. The newspapers had headlines such as “Hunslet sold Leeds match winner of this local derby.”

Shanks played for Leeds for several years before becoming their A Team player/coach, coaching amongst others the author, David Storey, who wrote “This Sporting Life,” later made into a famous film. Shanks played his last game for the Leeds first team on 8 Oct 1955. Later, he went to Batley for two seasons as a coach of the A Team, but he played in the first team too.  In 1959, aged 36yr,he retired from rugby league.  He had only had one serious injury to keep him out of the game. That was a broken right ankle sustained in 1951 when playing for Leeds. He had played in four Challenge Cup semi-finals but never got to Wembley as a player.

Our thoughts are with his friends and family at this time. The club will pay tribute to Frank with a minute’s silence when the Hawks take on Toulouse at the South Leeds Stadium on Saturday 3rd September.