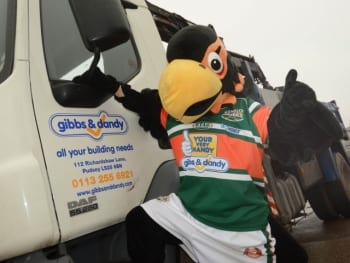 Local builders’ merchant, Gibbs & Dandy, has strengthened its partnership with Hunslet Hawks by sponsoring the 2015 kit.

The Gibbs & Dandy branding features prominently on the front of both the home and away shirts. The Hawks will don the new kit for the first time when the season starts in February. The team’s first fixture is an away match against Featherstone Rovers.

The 2015 kit marks the 50th anniversary of the 1965 Challenge Cup final when Hunslet played Wigan and has a number of design features to commemorate that game, including images from the cup final, which are sublimated on both the front and back of the playing shirts.

This sponsorship deal is the latest in the partnership between Gibbs & Dandy’s Pudsey branch and Hunslet Hawks. Earlier this year, the branch signed a three-year sponsorship deal to help fund the club’s work in the local community.

The five-figure deal will make a significant contribution to the rugby club’s community programme, in particular helping to fund the work of mascot Harry the Hawk and the development team as they visit schools throughout south Leeds.

Darren Hoyland, general manager of the Pudsey branch, said: “We’ve had a fantastic relationship with the Hawks for a number of years, so I’m very pleased that the partnership has continued with this kit sponsorship.

“Both the home and away kits look great and I can’t wait to see the team play this coming season. Good luck to them!”

Andy Hemingway, the team’s commercial director, said: “On behalf of the Hawks, I’d like to thank Gibbs & Dandy for its continued support. We have a strong relationship with the company and I’m delighted its branding will feature so prominently on both the home and away shirts.”