Harry flies to the summit of Snowden 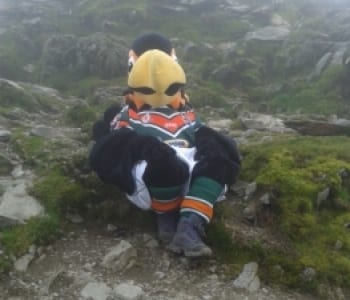 Harry the Hawk joined the latest “South Leeds Community Hike” organised by Ed Carlisle, under the auspices of the Salvation Army, with help from Mark Hodgkinson and Ben Hutchinson.  A total of 46 intrepid adventurers made the trip, with all but a couple completing the trek, which began in the small Welsh village of Rhyd Ddu [pronounced “rid thee”, according to Ed, our Welsh language expert].

The ascent up the mountain was made up the so-called Rhyd Ddu track and began in bright sunshine, with great views towards the summit and also the North Wales coastline.

On approaching the summit, however, the cloud descended, allowing only a view of the walker ahead.  Ed had promised temperatures feeling like -1at the summit – and he didn’t disappoint.

The descent was made by the Snowdon Ranger path, which proved as demanding on the aching legs as the walk up had been on the lungs.  However, the whole party was accounted for at base camp, much to Ed’s relief, and we all got back to Beeston & Hunslet in one piece.  How many pieces we were in on Sunday morning has not been recorded.

Ed, Ben & Mark were kind enough to thank Peter Todd, the Hawks General Manager, for providing and driving the Hawks minibus and Peter is looking forward to welcoming several new fans from the trip at the Hawks games.

If you want to add to the generous donations already made to help Harry’s work in the community, then visit www.totalgiving.co.uk/donate/hunslet-rugby-foundation