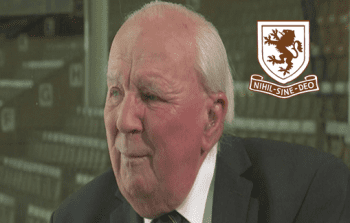 This Wednesday’s Memories Club promises to be a bit special as the ex-Parksiders take the opportunity to celebrate the birthday of one of their oldest members.

Harry Jepson, OBE, will be 95 on the 4th February and what better place to celebrate than the heart of rugby league in Hunslet.

Harry was born in Hunslet in 1920 and first visited his beloved Parkside in the late 1920s to watch the famous myrtle, white and flame, one of his earliest heroes being Jack Walkington. As a schoolboy he won a Scholarship to the renowned Cockburn High School and, having passed his matriculations, went to work at Leeds City Council’s Education Department in their Medical section.

Enlisted at the start of the Second World War, he joined the Duke of Wellington’s Regiment and then the Royal Army Service Corps, seeing active duty in North Africa and Southern Italy. Trained as a school teacher on his return, he was seconded to the famous League-playing Bewerley Street School where he came under the wing of the Headmaster there, Edgar Meeks, the Hunslet chairman. He became Hunslet’s assistant secretary in 1949 and secretary in the 1960’s.

The celebrations start at 12 noon and anyone with an appreciation of good beer and rugby league are more than welcome.