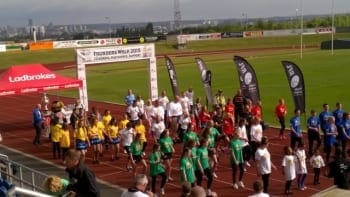 Actually he only took part in the Hunslet to Headingley section of the RFL Founders Walk, which will take in all the founder member clubs from 120 years ago.  The full walk of 120 miles is being undertaken by a hardy bunch of walkers who will spend 6 days visiting the clubs that took part in the first season of Rugby League (or Northern Union, as it was then) in 1895.

Day 3 began with tea and bacon sandwiches in Hunslet Hawks’ Phoenix Lounge, before the group of around 50 walkers led off  by ex Hunslet player Jimmy Brogden, who at 93 years of age is the oldest surviving ex Parkside player, the walk visited the site of Hunslet’s Parkside Ground and onward toward the city centre.  The route then diverted on to the Leeds & Liverpool canal towards Armley before rejoining the road traffic on the final stretch to Headingley Stadium.

Harry the Hawk was accompanied by junior players from the Beeston Broncos, who shared the duties of carrying the Hawks’ banners for the journey.