Harry the Hawk reaches the summit of Ingleborough 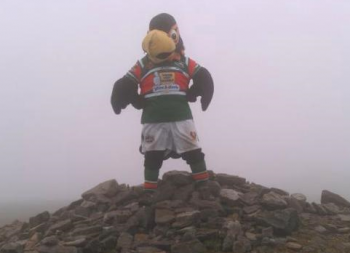 On Saturday three intrepid adventurers from the Hunslet Hawks took to the mountains of the Yorkshire Dales. General Manager Peter Todd and Chief Executive Darren Williams joined the main man, Harry the Hawk, in a bid to climb to the summit of Ingleborough, some 2,372 ft above sea level.

The Three Hawketeers joined a trip organised by Ed Carlisle and Mark Hodgkinson, which aims to give residents of Hunslet and Beeston Hill a day out and the chance to meet new friends as well as taking part in healthy exercise. The more energetic continued from Ingleborough to complete the ascent of the other two of the three peaks, namely Whernside and Pen-y-ghent.

The Hawks group raised funds for the Hunslet Rugby Foundation, a registered charity which promotes healthy living in the Hunslet community.

Congratulations to all three for completing the marathon, the aches and pains can still be heard in the club office today!