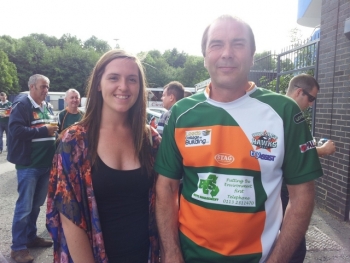 The club will be running two sponsored walks to Oldham on 27th July raising funds for two great charities, The Hunslet Rugby Foundation and SITRaN.

You can support them in their challenge by making a donation via our Total Giving web page www.totalgivingco.uk/mypage/harrysheroes

Your donations will really help make a difference.

The newly formed Foundation has been set up to support the South Leeds community and will focus on raising awareness of young people in the area on the benefits of healthy living and sport. It will also assist youngsters in making the transition from education to full time employment.

SITraN is the Sheffield research institute which does fantastic work into finding a cure for motor neurone disease. This cruel disease is close to the hearts of the club as it has taken the lives of ex-players Mark Burgess and Grabsie Wilson as well as Shaun Keane, the son of former player Stuart Keane.

Another way of getting involved in our fundraising activity is to join Marchy’s Marauders on the shorter 7 mile hike from Greenfield train station to the ground.

If you are keen to raise funds yourself but not so keen on a punishing 35 mile walk then Jonathon Turner has come up with an alternative involving a train, a number of real ale pubs and a 7 mile walk.  Again, all proceeds will go to the Hunslet Rugby Foundation and SITraN.

If you are interested in joining this group of intrepid explorers the details are as follows:

Meet at Wetherspoons in Leeds train station between 8.45 and 9am.

Catch the 9.44 train from Huddersfield t Greenfields (arrive at 10am)

Walk 5 miles from Greenfields to Oldham town centre for refreshments at The Squire Knott.

A further 3 re-fuelling stations are planned for the remaining 2 miles (the Ups Steps, Royal Oak and Ashton Arms)

After the game shared taxis will be on hand to return to Greenfield and partake in refreshments at the Railway and Wellington public houses.