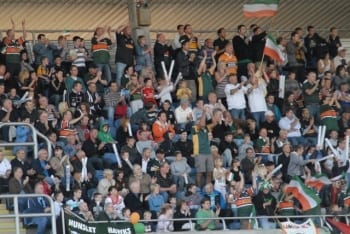 Hunslet Hawks will trial a new singing section for supporters this Sunday when we entertain Doncaster at the South Leeds Stadium.

The idea came about after talks between the club and fans’ group ‘The Ultras’ over a scheme to boost the atmosphere at home games as well as making the whole match day experience more enjoyable for both home and away supporters.

The new section will be located in the first two blocks of the upper tier and will be named “The Myrtle and Flame Singing Section”. It will be a dedicated area for Hunslet supporters to sit together to sing songs and support their team. It means vocal fans will be able to join together at the heart of the South Leeds Stadium to spur on the Hawks and generate songs.

Supporter liaison officer Phil Hodgson said “As a forward thinking club we are always looking to improve the match day experience for everyone. Our supporters have already gained a reputation as one of the most vociferous in the Championship. We believe the singing section can build on this and become a selling point for the club in its own right. We’ve 2 massive home games left and we need our supporters to turn out in force and shout the lads on to victory.

Sunday’s game against Doncaster is a must win game and we would encourage all supporters who are wanting to back the team vocally, to join your fellow supporters in the Myrtle and Flame Singing Section and roar the Hawks on to victory. #thegreatescape