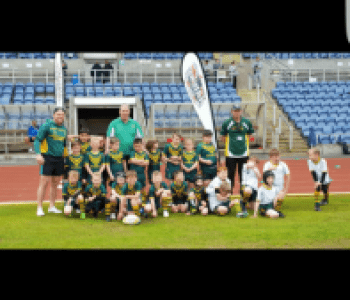 Hunslet Club Parkside were the latest community club to join us on a match day participating in a pre and half time game. The under 7’s & under 8’s arrived at the stadium at 12:30 and were given a guided tour of the stadium. Although they did not have a side to play against, that did not stop them from putting a performance in and entertaining.

Between both age groups there were a number of 23 players. We set out two pitches and on one pitch there was a 5-a-side U7’s vs U7’s game and on the other pitch it was a 6-a-side U7’s vs U8’s game with the U8s playing with a sub. Each game provided fantastic Rugby League with each team showing brilliant skills. A fun day all around and everyone involved at Hunslet Club Parkside enjoyed the day.