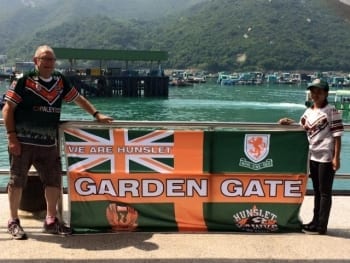 Lifelong Hawks fan Keith Hitchiner brings us an update on his recent trip to Hong Kong where he flew the flag for the Hawks.

“It was a while after booking my 16 nights vacation in Hong Kong that I discovered there was to be a rugby league competition by an advert for it on Facebook, so I liked and followed the page.”

“I messaged the coach, Jason Fairleigh, about the game in Hong Kong, and told him that I would bring him a 2014 Hawks jersey worn by Michael Haley during that season, and Hunslet legend Stephen Pryce agreed to provide me with one also. The competitions, which were the inaugural ones in Hong Kong, were due to take place on the penultimate day of my holiday, and advertised to start at 9am.”

“As with many places we had encountered it involved overcoming an incline to get there, and was immediately spotted by Jason who told us to get a drink and chill, as the competition would not start for another 90 minutes, although the mixed tag had got under way already. We did as told and were greeted by some others who recognised the strip and welcomed us, and were astounded to find how well we were prepared, for as well as the jerseys we had brought the Garden Gate Ultras flags as well.”

“One guy who took particular interest in the shirt and the Hunslet history was Brad Sunman, originally from Brisbane and wearing a Gold Coast Titans shirt, and such was his interest that he asked to join the Hunslet Myrtle White and Flame Facebook page.”

“I wandered over to where the tag was taking place and found them most to be local kids, and that it was a very popular sport here in Hong Kong. In contrast Rugby League was relatively new, and it was trying to merge the two in some way to progress and already an overseas game had been arranged at Manila Storm, with Jason as head coach. I also talked to James Hall from Guiseley, who had only been there 18 months, but was using his experience as chairman to progress the game there.”

“I also talked to the sponsor of the day, Mark from “One Bite HOOKED” fish’n’chips there, under the marquee who was giving away stubbies. It was a very enjoyable day, Team Bacchus won the tag, while Mong Kok Creepers beat Coastal Cobras in the final 17-4 after a tough battle all played in temperatures of 28 degrees. I presented the 2 shirts to Jason, who in turn gave me 2 tops, before the main presentation, after which the bus took them back to the Rula Bula, Central, for refreshments.”