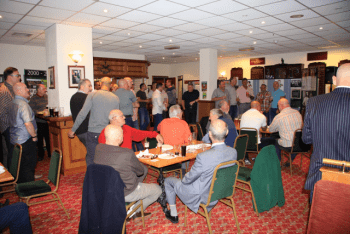 Friday 29th November saw the first get together of the Hunslet R.L. Ex Players Association held in Phoenix bar at the South Leeds Stadium.

40 past players and officials from the three eras of the Hunslet club, Parkside, New Hunslet and Hunslet Hawks were in attendance including Sonny Nickle, Graham King, Steve Pryce and Alan Platt.

Alan Platt travelled across the Pennines from Leigh to attend and others came from Castleford, Dewsbury and Leeds.

The buffet on the night was kindly paid for by Rugby League Cares.

Peter Jarvis said “The idea of the evening was to get a feel from all of the past players on whether we should have an annual dinner or a social evening in 2015. Or if the lads just wanted to simply get together more often.”

“There were a lot of good thoughts and ideas exchanged on how we could move the Hunslet R.L. Ex Players Association forward. I am sure that we will be having another event at a home game sometime in the 2015 season and we look forward to supporting the current squad as they embark on what is expected to be an exciting season in the Championship.”