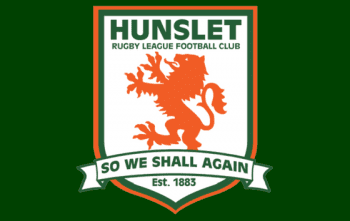 Hunslet Hawks can today reveal that our supporters have voted for the Rampant Lion to be our new club crest.

The vote took place on Saturday prior to our narrow defeat to Toulouse Olympique in our final home game of the 2016 Kingstone Press League 1 season.

There was a feeling amongst supporters online in the week leading up to the vote and in the Phoenix bar on the day of the game that the vote would be close, and that’s exactly how it played out. The result of Saturday’s vote was:

General Manager Martin Flynn said “We always knew that it was going to be close as both crests have played a huge part in our history and are very popular amongst supporters of all ages.

“Our supporters have voted and their decision now means that we will now adopt the Rampant Lion as our new club crest.

“These are exciting times for the club and we thank our supporters for playing their part in shaping the future of our club.

“We will continue to update our supporters as we go on this journey together. This is only the beginning of what we believe will be an exciting new era for Hunslet R.L.F.C.”