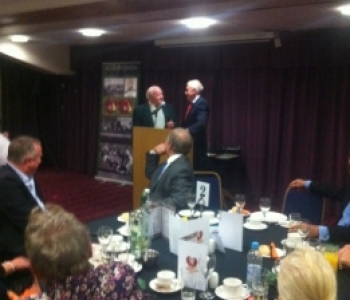 Saturday evening saw the launch of the first Hunslet Hawks RLFC Heritage dinner at the South Leeds Stadium. Players past and present, club directors, and volunteers, together with local businesses ensured that the Parkside Suite was packed to the rafters for an evening that would see laughter and tears in equal measure.

Master of Ceremonies Harry Gration got the event underway with a prize raffle, and after a splendid five-course meal the evening rapidly gained momentum.

The family of ex-player Allan Snowden were in attendance as he was inducted into the club’s ‘Hall of Fame’, and there was also a lively interview with 90 year old legend Alf “Ginger” Burnell.

There was also a moving speech by ex-player Stuart Keane, as he highlighted the club’s chosen charity SITRAN, who will benefit financially from the dinner.

Impressionist Kevin Connelly, and comedian Lea Roberts were both well received, and the evening was rounded off with an auction of sporting memorabilia.

Overall, the evening was a tremendous success, and will hopefully become an annual event in South Leeds.