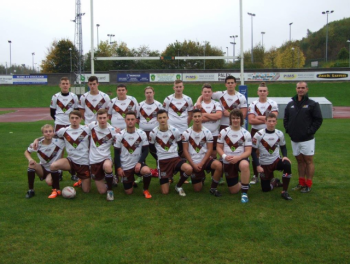 This year’s new intake of students saw a number of talented rugby league players join the college, giving a great boost to the team. The match started off very well with LCB Hawks showing great passion and determination leading to an early cross of the try line by Liam Gaunt, who also added 2 points from the conversion. A strong effort in defence from LCB Hawks meant that Calderdale had to work very hard to respond, after many sets of trying, they eventually found a gap to draw the score level. LCB Hawks continued to apply the pressure and after great team work Liam Gaunt again found a gap and successfully converted the kick. Calderdale came back with 2 tries and 2 conversions before the half time whistle, taking the score to 12-18 in their favour.

As the second half kicked off, LCB Hawks again were the dominant force moving the ball well across the field to allow Sheridan Farley to cross the line. Calderdale responded by picking up the pressure; as tensions on the field rose LCB Hawks remained calm and focused on the task in hand holding out for a strong period of attack until eventually Calderdale broke through the line to score, a conversion followed. Calderdale scored a further four times before the final whistle was blown. The final score was 16-40 to Calderdale; however the score line is not a true reflection of the hard work put in by all members of the team in what was a tight contest.