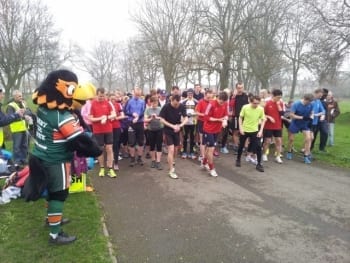 Hunslet Fans Go The Extra Mile (and then some)

Congratulations to Colin and Keith Johnstone who completed their first ever marathon this month.

Running 26.2 miles is the ultimate challenge made all the more remarkable by the fact they only took up running in May this year.

Colin recalls, “We were having a few beers at a boxing function in Scarborough. I said I wouldn’t mind getting fit so I googled “How long to get fit” and Google told me ‘couch potato to 10K’ can be done in 12 weeks. I wasn’t quite a couch potato so entered the Leeds 10K, which was just 8 weeks away. I started training and made my debut Cross Flatts Parkrun on 20th May.  Parkrun is a great way to get fit and make new friends, it is only 5k and caters for all abilities.  There are quite a few Hunslet supporters who take part and everyone is really encouraging.

I was soon joined by my twin brother Keith who also entered Leeds 10K. We did several Parkruns and well and truly got the running bug. Before we’d even ran the Leeds 10k we felt confident enough to enter the Bradford 10K. The day after completing the Leeds 10k we entered the Vale of York half marathon. Some people said we were stupid but we ignored them, so much so we then entered the Yorkshire Marathon.

The weeks flew by and on the 11th October I was on the start line with my brother ready to take on the challenge of a lifetime.

It was extremely hard, both physically & emotionally, but just 21 weeks & 2 days from the spontaneous decision to take up running, we did it. We can’t thank everyone at Parkrun enough for their support. It gave us our first step towards this ‘impossible’ dream. In many ways they believed in us more than we believed in ourselves. Something we’ll always appreciate”.

So far the lads have raised over £1000 for the Sue Ryder charity and the Motor Neurone Disease Association.  If you would like to donate please go to  https://www.justgiving.com/Colin-Johnstone2/?utm_id=26