Margaret Gibbon is Proper Fan of the Season 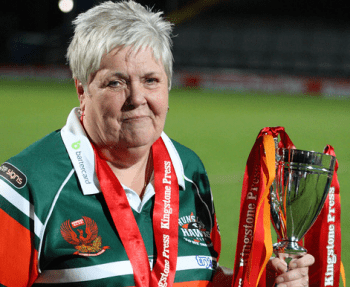 Margaret beat eight other finalists to be revealed as the country’s most dedicated Rugby League fan at Headingley Carnegie stadium.

Margaret, who was presented with a trophy from Leeds Rhinos and England player Ryan Hall, said she was “shocked but pleased”.

“To say I love Rugby League as a sport is an understatement, and am a die-hard Hunslet Hawks fan and that will never change.

“After watching my beloved Hunslet win the Championship One title and gain promotion I thought the day couldn’t get any better – but then when Ryan Hall announced my name, I was on cloud nine. It’s like a dream come true being able to watch England play in Australia too – I can’t wait.”

She was chosen because of her 25-year commitment to the club, including helping out with everything from selling tickets and organising functions to standing in as a ball boy and even clearing snow off the pitch.

Glen Friel, sales and marketing director at Kingstone Press, said: “We offer a huge congratulations to Margaret, she is a truly deserving winner. It is fantastic to see the devotion fans have for the sport and obvious to see why Rugby League is so popular.

“We are pleased to be able to offer some reward to the fans for their loyalty and we look forward to hearing all about Margaret’s trip on her return.”