Masters International to be a Family Affair 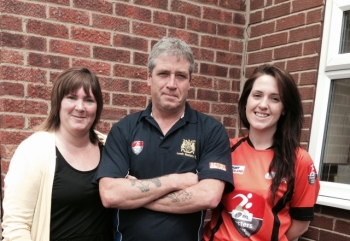 Rugby League has always prided itself on being a family game and the Masters community has stepped this up a gear having three family members featuring in the Great Britain v Australia at Crosfields ARLFC, Warrington on July 12th with 1pm kick off.

Mum, Kath Wilson, appointed Great Britain Masters Team Manager earlier this year,  is joined by Dad Carl Wilson who was selected to play for Great Britain Masters just a few weeks ago. Now daughter Niamh has been asked to join in on the antics selected as touch judge for the international fixture with the touring Australian Masters.

The trio enjoy nothing more than spending days supporting, playing and even refereeing the Greatest Game but an opportunity to share an experience such as this is really exciting. Kath started out as manager of the Farnley Falcons Girls before taking on the role of Manager of the Leeds Masters Group. Dad Carl, a lifelong Hunslet Hawks supporter which is a passion he shares with daughter Niamh, plays regularly for the Leeds Masters. Niamh who previously played county level Rugby League is also the current Hunslet Hawks reporter. Masters Rugby League is a passion shared by all the family and they just can’t get enough of the game.

The Masters community is a big promoter of family orientated Rugby League:  wives, partners, children and even grandchildren can often be seen (and certainly heard!) supporting their clubs from the touchline on match day.

Although as an official on the day of the International, Niamh will be watching the game through neutral eyes, the family will all be hoping for a big performance from the Great Britain boys come the 12th July as they battle out a 0-0 draw with their fellow Masters from Australia.