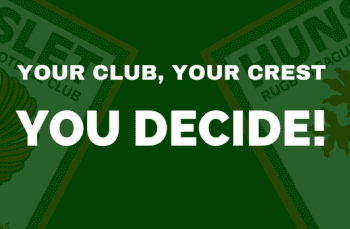 The club is delighted to reveal two club crest designs, that will now be put forward to our supporters to vote for their preferred choice.

The vote will take place at our home game against league leaders Toulouse, which takes place this Saturday (3rd September), Kick Off 3pm.

The club has been working closely with our print and design partner All Design & Print Ltd, York, on a number of designs over the past couple of months.

The two designs which have been shortlisted by the board are based on two previous club crests that the club has adopted over its proud history.

The first is the rampant Lion, and the second the Phoenix rising from the ashes. Both crests will have “Hunslet” as the predominant text on the top of the shield, with the words “Rugby League Football Club” underneath. The crests will also include the text “So we shall again” which is a line from the clubs famous war cry “We’ve swept the seas before boys”. The new crests will also feature, for the very first time, the year the original Hunslet club was established which was back in 1883.

Although the new crests celebrate the great history and heritage of our club, we have worked closely with All Design & Print Ltd, York to add a modern style to the crest with the shield design and font of the text.

Club Chairman Neil Hampshire said “I’d like to thank all those who took part in the recent vote which resulted in us changing our name back to Hunslet RLFC.

“I’d now urge all our fans to attend what will be an exciting encounter against table topping Toulouse, as we look to inflict their first defeat of the season whilst at the same time voting on our new club crest.

“There will be two options to choose from, both linked to our history. The first will feature the original rampant Lion which adorned our shirts from 1883 through to 1973. The second will feature the Phoenix rising from the ashes which was emblematic of our reformation as New Hunslet in 1973. We are delighted with both designs and we hope that both options will be well received by our supporters.”

“The vote on the new club crest is your chance to help shape the next chapter in the clubs history, so please come along and grasp the opportunity.”

Voting slips will be available in the club shop and the Phoenix Bar. Entry to the game is £15 for adults, £10 Concessions and FREE for Under 16’s.