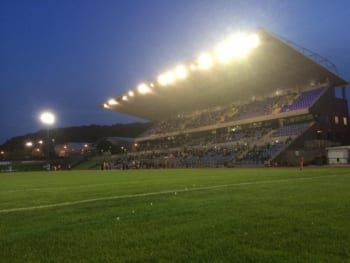 As part of a report submitted to a meeting of Leeds City Council’s executive board on Wednesday 18 October 2017, members will have the chance to discuss a revised lease agreement for the historic club, who have played their home games at South Leeds Stadium (now part of the John Charles Centre for Sport) since 1995. This follows a previous long-term lease which expired in November 2015, which meant a temporary arrangement was then put in place between the council and club to allow the club continued use of the facility.

If agreed, Hunslet RLFC will be granted a 25-year term contract and pay a minimum base rent, fixed for ten years. If the club is promoted during this ten-year period, the council would receive an agreed percentage of the income that Hunslet RLFC may collect from the Rugby Football League (RFL), where this amount is greater than the base rent. Along with the right to play up to 25 matches per season, the club will also retain exclusive use of the club shop on site, office and bar.

Underpinning the lease deal is also a requirement from the council that the Hunslet Rugby League Charitable Foundation continue to provide a community development programme.

“Since the founding of rugby league in 1895 Hunslet has proudly hosted a rugby league team. Today, Hunslet RLFC is carrying on the tradition of playing an important and valued role in the south Leeds community.

“The revised lease agreement that we have put forward will ensure that the club and its loyal supporters can remain confident that in the John Charles Centre for Sport they have somewhere which can be called home and lay the foundations for the club to plan for the longer term and hopefully rise back up the leagues.”