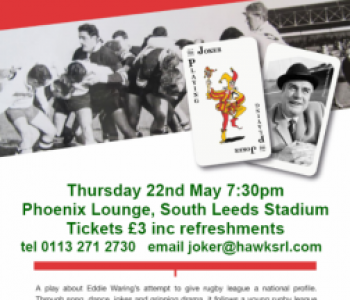 Thursday 22nd May will see the first live performance from a professional theatre group in the Phoenix Suite.

The Play, entitled Playing The Joker, is written by award-winning author, Anthony Clavane, and performed by the equally acclaimed Red Letter Theatre Company.

The story is based on the late Eddie Waring’s attempt to give rugby league a national profile.  Through song, jokes and gripping drama, Playing The Joker examines the People’s Game through the eyes of its voice – Eddie Waring – and its fans and asks whether Eddie was good for the game or not. This moving, funny and critically acclaimed portrayal of a slice of 1970s northern life staged its first public performances at the West Yorkshire Playhouse and has since embarked on a tour of rugby league venues across the North of England.

The intimate setting of the Phoenix is perfect for the play which features just 3 characters and is best when set with the audience surrounding the action.

Tickets for the one-off performance in South Leeds are priced at just £3, which includes light refreshments. The action kicks off at 8pm and lasts about 45 minutes – or the second half of a match at Parkside (with injury time!). But don’t worry if Eddie Waring (and even Parkside) are a bit before your time, the reviews promise an entertaining evening for anyone “having pride in where you come from.”

Numbers are limited and tickets are selling well, so to guarantee your place you are advised to purchase your tickets in advance by calling in at the Hunslet Hawks shop, situated in the reception area of the John Charles Centre for Sport (Middleton Grove, LS11 5DJ) or by ringing 0113 271 2730. Enquiries can also be made by email to joker@hawksrl.com.