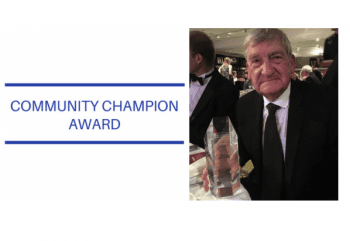 We are proud to announce this years winner of the Supporters Direct Community Champion Award as the wonderful Ray Abbey.

Ray was presented with his award on stage at the RFL Kingstone Press Championship & League 1 Gala Dinner at the Midland Hotel last night.

This year we received an overwhelming amount of nominations from all over Rugby League at all levels with some incredible stories being shared. This culminated in our decision to compile a shortlist of 12 nominees that were each celebrated in the run up to the announcement of the winner.

Ray is a inspiring winner of the award and his dedication to the sport worthy of recognition. His enthusiasm and passion for the sport of Rugby League sport would put someone half his age to shame!

The former player turned coach is involved in a number of organisations across the game supporting fellow ex players and encouraging youth development. Ray has a passion for protecting the heritage of the game be that at individual clubs or the game as a whole and has invested hours of time raising much needed funds for a variety of different worthy projects over the years.

We received nominations for Ray from across the Rugby League family and were blown away by just how many lives his work has touched over such a long period of time.

Ray is a magnificent ambassador not only for the sport, but for many community projects he willingly gives his limited spare time to with equal passion and gusto. A true gentleman and respected throughout Rugby League, that is Ray Abbey, our 2017 Community Champion.