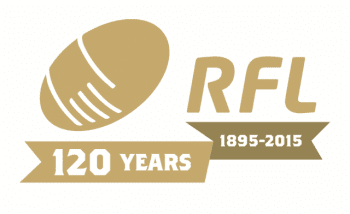 The RFL and the sport’s charitable arm Rugby League Cares today announced details of an exciting series of events and celebrations that will take place throughout 2015 to mark Rugby League’s 120th anniversary.

Rugby League was founded at a meeting at the George Hotel in Huddersfield on August 29, 1895 when 22 clubs broke away from the RFU to form the Northern Union, the governing body that would become the RFL.

The plans to celebrate that momentous breakaway were announced today at the home of one of the sport’s founding clubs, Batley Bulldogs, who still play at Mount Pleasant (now called Fox’s Biscuits Stadium), the same stadium they used to host their first Northern Union fixture, a 7-3 victory over Hull on September 7, 1895.

The activities will include the Founders Walk, a celebratory 120-mile fund-raising walk taking in the sites of the 22 founding clubs’ grounds, a special ‘Back to the Game’ round that will allow clubs to pay tribute to their former players and fans and the unveiling of a commemorative statue at Wembley Stadium on the day of the 2015 Ladbrokes Challenge Cup final, August 29, the sport’s 120th birthday.

In addition Rugby League Cares will roll out a Heritage exhibition across the UK and the sport will look to erect commemorative blue plaques at the site of all 22 original Northern Union grounds. Later in the year, to coincide with the visit of the New Zealand tourists, two more of the game’s legends will be inducted into the Rugby League Hall of Fame at a celebratory dinner.

To mark the celebrations, a special 120 year logo has been produced that will appear across all media used by the sport in 2015.

RFL Chief Executive Nigel Wood will play a key role throughout the historic celebrations, including leading the way on the Founders Walk when people involved in every strand of the game will be encouraged to participate at some stage over the six days to help raise £120,000 for Rugby League good causes.

Nigel Wood said: “In a year that we mark Rugby League’s special anniversary it is appropriate to reflect on the long and proud history of a sport that means so much to so many people around the world.

“Rugby League was born of a struggle based upon the right to fair play and that burning desire for equality and openness has resonated across the decades.

“The decisions taken by the game’s founding fathers were bold, dynamic and welcoming, three qualities which are as important and relevant in Rugby League today as they were in 1895.

“As well as celebrating our heroes, this year provides us with an opportunity to acknowledge the debt of gratitude we owe to the people involved in the 22 founder clubs, whose foresight has left a wonderful and indelible legacy.

“I hope as many people as possible embrace the celebrations that will take place over the coming months, be that participating in one of the legs of the Founders Walk, getting involved in the activities during the Back to the Game round or simply visiting the wonderful Wembley statue when it is unveiled on the morning of the Ladbrokes Challenge Cup final.

“Now is the perfect time to acknowledge and celebrate the extraordinary journey of which we are all part: Happy 120th birthday Rugby League!”

Four clubs still play in, or on the site of, the stadium used in the first Northern Union season of 1895: Batley, Leeds, Wakefield and Widnes.

Details of how people can become involved in the Founders Walk in July will be announced in due course. A full itinerary of the walk will also be confirmed in the next few weeks.

The artwork, created by East Yorkshire-based sculptor Stephen Winterburn, will be unveiled on the Wembley concourse on the morning of the 2015 Ladbrokes Challenge Cup final, Saturday August 29.

The Rugby League Hall of Fame currently features 23 players who have a record of outstanding achievement at the highest level of the game and who have made a last contribution to the sport. They are also deemed to have a reputation that transcends the era in which they played and must be retired for 10 years or more before being considered for induction.

Back to the Game

As well as a detailed round for clubs in all competitions to become involved in (details tbc), the Back to the Game celebrations will also see Rugby League Cares continue to work on the successful reunions programme that is already re-engaging hundreds of former players who have lost touch with the sport.

Rugby League Cares is the sport’s charity dedicated to supporting the rugby league family and its local communities. Its mission is to enhance and enrich people’s lives through the power and positive influence of rugby league.

•Past: Celebrating and protecting rugby league’s heritage and traditions;

•Present: Helping to take care of members of the rugby league family, especially in times of hardship and distress;

•Future: Securing the future by funding, and supporting projects at the grassroots of the game.