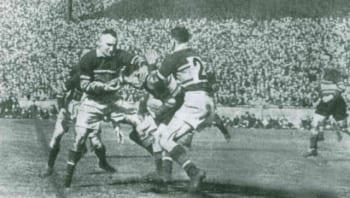 Leeds and Hunslet will meet in the Harry Jepson OBE Memorial Trophy this Sunday at South Leeds Stadium and Harry was in attendance 79 years ago along with 54,112 other Rugby League fans to see the most famous meeting between the sides at Elland Road.

The 1938 Championship final was probably the most famous game of rugby league ever staged in Leeds and certainly the most eagerly awaited. Ever since the early days of the Northern Union, fans of Leeds and Hunslet had dreamed of their sides meeting in a major final. Leeds and Hunslet both qualified for the Championship semi-finals in 1928 and 1932, only to lose out, but in 1938 the sport’s best two teams both came from Leeds and the dream final was a reality at last. Hunslet topped the table at the end of the regular league season with a record of 25 wins and three draws from their 36 matches and Leeds were second, just a point behind with 25 wins and two draws.

Hunslet beat Barrow 13-7 in a nervy semi-final at Parkside and when the Loiners took on Swinton two days later, members of the Hunslet team were in the 29,000 Headingley crowd to see if their arch-rivals could set up the all-Leeds title decider. Under-strength Leeds, missing seven first-choice players, trailed 2-0 at half-time and were still behind going into the final quarter, only for Eric Harris to intercept a pass near his own line and race clear for a sensational try, converted by Evan Williams to seal a nerve-tingling 5-2 triumph.

The Championship decider was originally due to be staged at Wakefield’s Belle Vue ground, but at the request of officials from both finalists it was switched to Leeds United’s Elland Road stadium to become the first game of rugby played there for almost forty years.

Hunslet were looking for their second Championship, after beating Oldham following a replay way back in 1908. For Leeds, it was their fifth Championship final, their third of the decade, and they were yet to taste victory. The tie put the city’s newspaper, the Yorkshire Evening Post, in a difficult situation and its sports writers were desperate to appear impartial, taking the attitude of ‘we don’t care who wins as long as it’s a good game’. On the day of the match the newspaper predicted the Loiners had ’an even chance, no more than that’ – though Leeds’ injury crisis made Hunslet most people’s slight favourites.

The all-Leeds final created massive interest on both sides of the river and the decision to take the game to Elland Road was vindicated by a huge crowd of 54,1 12, still the biggest for a game of rugby league in the city. Ironically, they had to make a swift exit after the game as Leeds United had arranged a reserve match for the same evening. Magistrates allowed pubs near Elland Road to open half an hour early and thirty buses were laid on to ferry fans from City Square to the ground from two hours before kick-off. Queues formed at the boys’ entrance before the turnstiles opened at 1pm and there were crowds of people milling around outside before even the teams arrived. Some fans climbed on to the stand roof in an attempt gain a better view of the action, but they were chased down by constables and by kick-off the gates were closed with many supporters locked outside.

For all its dramatic build-up, the game itself was a disappointment and full-strength Hunslet were more convincing winners than the final 8-2 scoreline suggested. Leeds went into the final without forwards Ken Jubb and Alf Watson, who were both suspended, and were also missing the injured Cliff Whitehead, plus backs Cliff Evans, Fred Harris and Jim Brough. The good news for the Loiners was the return of inspirational Australian stand-off Vic Hey, who had missed the semi-final through injury. That proved a false dawn though as Hey picked up a new knock and he and winger Stan Smith, who was injured mid-way through the first-half, were both reduced to the role of passengers. The injuries gave Leeds fans an excuse in the pubs and workplaces after the game, but Hunslet were already on top by the time Smith and Hey were injured. The Parksiders’ forwards dominated the Leeds six and, inspired by the splendid form of centre Cyril Morrell and stand-off Oliver Morris, their backs had the class to open up the Loiners’ over-stretched defence. Leeds drew first blood on seven minutes when – after Hunslet’s Jack Walkington had failed with a penalty kick into the strong wind – the Parksiders were caught offside and Ted Tattersfield landed a well-struck goal to give the Headingley men a two-point lead.

The result could have been different had Leeds made the most of a brief numerical advantage while Hunslet prop Mark Tolson was off the field receiving treatment to a leg injury, but Evan Williams twice failed to find Eric Harris with what could have been try-scoring passes and a Hey break was wasted through lack of support. Tolson’s return inspired Hunslet and they grabbed the opening try when centre Ernest Winter stepped and dummied his way over, only for Walkington’s conversion attempt to hit a post and bounce out. That was on 23 minutes and Leeds were opened up again six later when, after Walkington had again been off-target with a penalty shot, Winter broke away to send lrish winger Jimmy O’Sullivan over by the flag for an unconverted try. Playing into the wind and with injuries beginning to bite, Leeds never really looked like pulling the game out of the fire in the second-half. After Tattersfield missed with an early penalty attempt, the Loiners had just two clear try-scoring opportunities, Harris being shoved into touch after a Dai Jenkins break before the scrum-half raced away, but couldn’t find Stan Brogden with his pass. Walkington’s field kicking kept Leeds on the back foot and he sealed Hunslet’s title late on with a long-range drop goal.