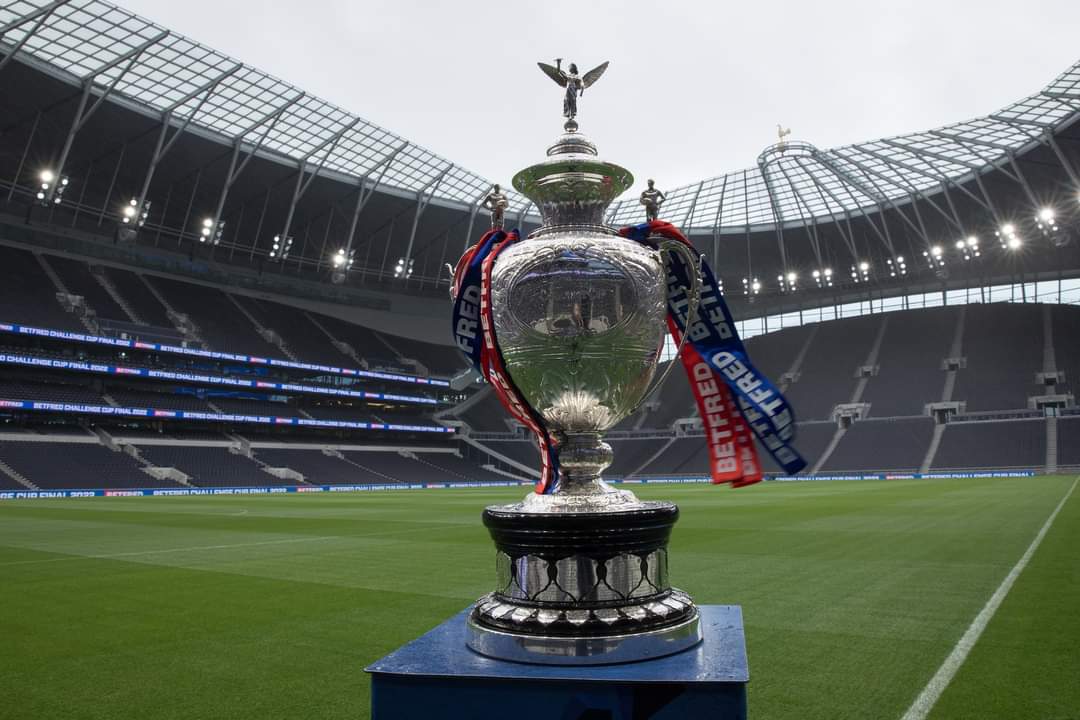 The road to the 2022 Betfred Challenge Cup Final will begin at the Tottenham Hotspur Stadium, where the winners will be crowned next May – and which will stage the draws for the First and Second Rounds on Tuesday December 14.

Teams from the community game will return to the First Round of the Cup next January after their Covid-enforced absence from the 2021 competition, before they are joined by the semi-professionals of Betfred League 1 in the Second Round two weeks later.

The double draw will be streamed live on BBC Red Button as well as the RFL’s Our League web and app, with coverage from 530pm.

The 28 teams in the First Round draw include some of community Rugby League’s most prolific nurseries of talent, such as the 2021 National Conference League champions Thatto Heath Crusaders from St Helens – who reached the Fifth Round of the 2019 competition with a Cup run including a victory over North Wales Crusaders.

They will be joined by London’s two leading community teams – the 2021 Southern Conference League champions Wests Warriors and London Chargers, the team they beat in the Grand Final.

Bridgend Blue Bulls, Edinburgh Eagles and Galway Tribesmen will represent Wales, Scotland and Ireland respectively, with Jarrow Vikings from the North East of England, and the usual strong Armed Forces representation from Army, Navy and RAF, in addition to the Great Britain Police.

The Second Round draw will include four former winners of the Challenge Cup – Hunslet, Oldham, Rochdale Hornets and Swinton Lions – as well as one of the new names in Betfred League 1 next year, the Midlands Hurricanes.

They will be joined by Doncaster, Keighley Cougars, North Wales Crusaders, West Wales Raiders and perhaps most fittingly, given the location of the draw and the 2022 Final, London Skolars – who play nearby at the New River Stadium on White Hart Lane.

It has been agreed that Cornwall, the other new team in Betfred League 1 in 2022, will not enter the Challenge Cup in their debut season.

Those five clubs will also qualify for the AB Sundecks 1895 Cup – with a play-off on the Betfred Challenge Cup Quarter Final weekend of April 9-10, and the Semi Finals of the Challenge Cup and 1895 Cup to be played on the weekend of May 7-8.

The Betfred Challenge Cup Final will be played at the Tottenham Hotspur Stadium for one year only in 2022, before returning to Wembley Stadium in 2023.

Tickets for Challenge Cup Final Day on Saturday May 28 – which also includes the AB Sundecks 1895 Cup Final – are on sale now with a special Early Bird offer of £5 OFF all tickets, with prices starting from only £25 Adults and £10 Under 16s at eticketing.co.uk/rugbyleague.

In the Second Round draw, they will be joined by the following 10 teams from Betfred League 1 – with Second Round ties to be played on the weekend of January 29-30: Doncaster, Hunslet, Keighley Cougars, London Skolars, Midlands Hurricanes, North Wales Crusaders, Oldham, Rochdale Hornets, Swinton Lions, West Wales Raiders