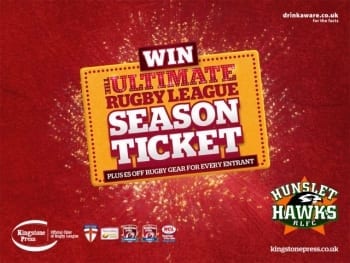 Official Cider of Rugby League, Kingstone Press, is offering Hawks supporters the opportunity to be there from start to finish for all of 2016’s showpiece events, including England Internationals, with the Ultimate Season Ticket.

One lucky fan will win a pair of tickets to attend the World Club Series, the Summer Bash, the Magic Weekend, the Ladbrokes Challenge Cup Final, the Kingstone Press Championships Finals Day, the Million Pound Game, the First Utility Super League Grand Final and an England international at next autumn’s Four Nations.

The prize includes travel, accommodation, plus a home and away replica shirt and a pair of season tickets from a club of the winner’s choice.

There are weekly prizes up for grabs; including England shirts, Championship balls and cases of Kingstone Press Cider, and every entrant will receive £5 off the new England shirt or any 2016 NRL shirt at Advantage Sports.

Fans can enter the competition for free from 19 October by visiting KingstonePress.co.uk.

On 19 January, ten finalists will be randomly selected to attend next year’s Super League launch event where they must demonstrate their skill and knowledge to be crowned the competition’s Ultimate winner.

Sales and Marketing Director for Aston Manor Cider Glen Friel said: “With a thrilling club season under our belts and an exciting International Series to look forward to, we’re delighted to be able to reward one lucky fan with what we believe truly is Rugby League’s Ultimate Season Ticket.

“Kingstone Press is proud to be the Official Cider of Rugby League, giving fans the opportunity to experience a truly refreshing, authentic cider, and we’re already eagerly awaiting next year’s calendar of events. This competition offers supporters an opportunity to be there from start to finish.”

Visit www.kingstonepress.co.uk for more information and to enter now!