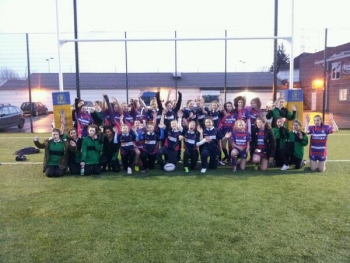 Thursday 13th February was the turn of the girls Year 8 teams in Leeds to try gain qualification to the regional rounds of the champion schools competition. Cockburn, Corpus Christi and Roundhay all came to the competition with the hope of progressing. Cockburn and Corpus Christi were the favourites as they have a lot of playing experience within their teams and they showed their dominance qualifying to the next round.

Roundhay are relatively new to the game and Thursday was their first festival. They have only been training properly together for five weeks and were outstanding and are definitely a team to watch. Roundhay played in the first game against Cockburn and they struggled to adjust to the pace in which Cockburn played. However after a few words with Lois they realised they needed to hold down in the tackles more and also move off their line together. After making these improvements they steadied the ship and finished with a commendable performance. Roundhay even scored their first try of the tournament through elusive running from Katie Costello.

Next up was Cockburn and Corpus Christi. Corpus Christi were fresh having not played yet and raring to go where as Cockburn were slightly fatigued. Cockburn did well with some great defensive and attacking efforts, however could not contain Corpus Christi all of the time with them taking the win in the second game. Corpus’ Orlaith Arnold was impressive as she crossed the white wash for Corpus Christi three times claiming a hatrick.

The final game was between Roundhay and Corpus Christi in which Roundhay were certain underdogs. Roundhay came out fresh after a rest and determined to improve and gave Corpus Christi a shock. Roundhay tightened up in defence and managed to slow Corpus Christi down creating them problems. The games was tight with each team scoring three tries, Roundhay’s coming from Tiger Pugh who was outstanding. Corpus Christi’s Tilly also touched down with an excellent drive fending off and skipping through the Roundhay defence. In the end Corpus Christi beat Roundhay by only four points with the game finishing 16-12.

Well done to Corpus Christi and Cockburn on qualifying all the best for the regionals on Tuesday 4th March.