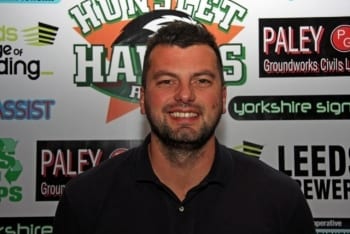 Hawks Marketing and Media Director Gareth Evans stepped down from his role at last nights AGM. Evans has had to take a step back due to increasing family and work commitments.

Chairman Neil Hampshire said “We are very sad to see Gareth step down but fully understand the reasons why. Being a supporter owned Club we will always be vulnerable to this kind of situation and certainly family comes first in my book so Gareth is making the right choice.”

“It’s a double blow for me though as Gareth was a big factor in me becoming involved and was one of the two original instigators in setting up the Supporters Trust that so it was in a position to take over the Club in the first instance. He has stood shoulder to shoulder with me from the start in trying to put the Club at the Heart of the Community and drive up our sponsor and support base. He can be immensely proud of his work with the Hawks and he will be an almost impossible act to follow.”

“Luckily for us he has agreed to still try and help out when and where he can and we’ll still see him regularly at games. I’d like to take this opportunity to thank him for the incredible work he’s done for the Club and he knows the door is always open for him to return in the future”

Gareth commented “It’s been a privilege to have played a small part in clubs rise over the last 3 years. I’m immensely proud of the work I have delivered for the club during my time as a Director and I step down with the clubs marketing and online activity now amongst the best in the sport.”

“With two young Children and a full time job it has become increasingly more difficult to incorporate my role with the club, so it feels like the right time to step down.”

“I’d like to thank all my fellow Directors for their support over the last few years, and all the volunteers who have supported me during my term. I will still continue to support the club where I can and I look forward to witnessing the continued rise of the club under the stewardship of the current board.”

Chairman Neil Hampshire was also returned unopposed at Thursday’s AGM. Hampshire said “It’s an honour to stay at the helm of the Club for another two years and I’m incredibly proud of everything we have achieved since we took over. We continue to work closely with the Council and the local community to grow the business which can only serve to stabilise the Club further and keep improving us on the pitch”