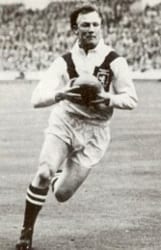 Brian Gabbitas was one of the most talented players to pull on a Hunslet shirt and was known and respected throughout the game as an outstanding stand off and a sportsman of the highest quality. He signed for Hunslet as a 17 year old in 1952 and played 349 games over the following fourteen seasons. He played 3 times for Yorkshire and was capped for Great Britain. His greatest footballing claim to fame will always be the 1965 Wembley Cup Final when he won the Lance Todd Trophy (shared with Ray Ashby) for being the player of the match.