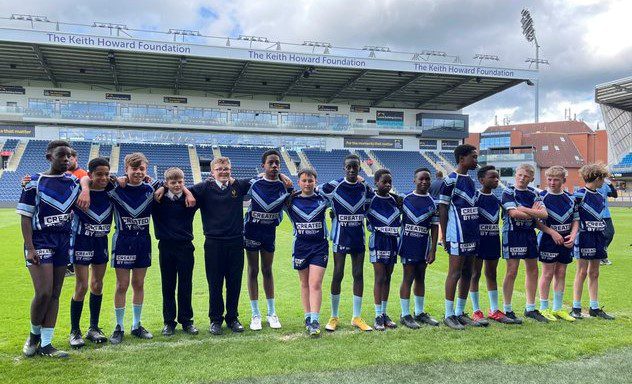 Around 30 school teams took part in the recent nine-a-side play-offs at Years 7, 8 & 9 age-levels, with four different schools taking the honours in six different competitions. South of the river school Cockburn were victorious in two of the competitions.

The play-offs were held at Brigshaw School. Winners of the second-tier competition were Temple Moor at Years 7 and 8, and Cockburn at Year 9.

The top two teams in the main competition qualified for the champions finals which were held at Headingley. At Year 9 Allerton Grange added the nines title to their win earlier this season, in the 13-a-side Lee Trophy, with a commanding victory over Brigshaw. Leeds West overcame a courageous fightback by Brigshaw to win the Year 8 title, by seven tries to four. The Year 7 decider provided the most exciting game of the evening when Allerton Grange played Cockburn. The north Leeds side had most of the first-half pressure, but Cockburn scored first and the teams were level, one try each, at half-time. Allerton Grange scored two early second half tries, but their south Leeds opponents took command of the game to draw level by full time. The game went to “golden try” and the hero for Cockburn was Jil Yeboah who crossed for the decisive score in the opening minute of extra time.

The girls’ high school and the primary school seasons reach their climax in the next few weeks. Included in the trophies to be presented are a couple with Hunslet connections: the Goldthorpe Cup for girls Year 7/8 champions and the Culley Trophy for the primary school seven-a-side tournament.

The national champion schools finals will be held in Newcastle the day before “Magic Weekend” (Friday 8th July), with the Year 7 boys’ final being held as a curtain-raiser at St James Park on the Saturday. The matches will feature a majority of schools from Yorkshire, but no sides from Leeds and Hunslet. The only team from the city to reach the semi-finals were Farnley Year 7 girls, who were beaten by Hull school Malet Lambert, 34-22. There was however a Hunslet connection in the Malet Lambert team: one of the try-scorers was Alexia, daughter of former Hunslet favourite Rob “Two Bobs” Roberts and sister of current player Josh Jordan-Roberts.

For more information about the schools’ rugby league in the city and county, and nationally, log on to the Leeds & Hunslet SRL Facebook page Leeds & Hunslet Schools’ Rugby League | Facebook , or the website: https://leedsandhunsletsrl.wixsite.com/mysite-4 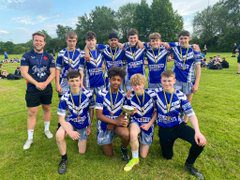