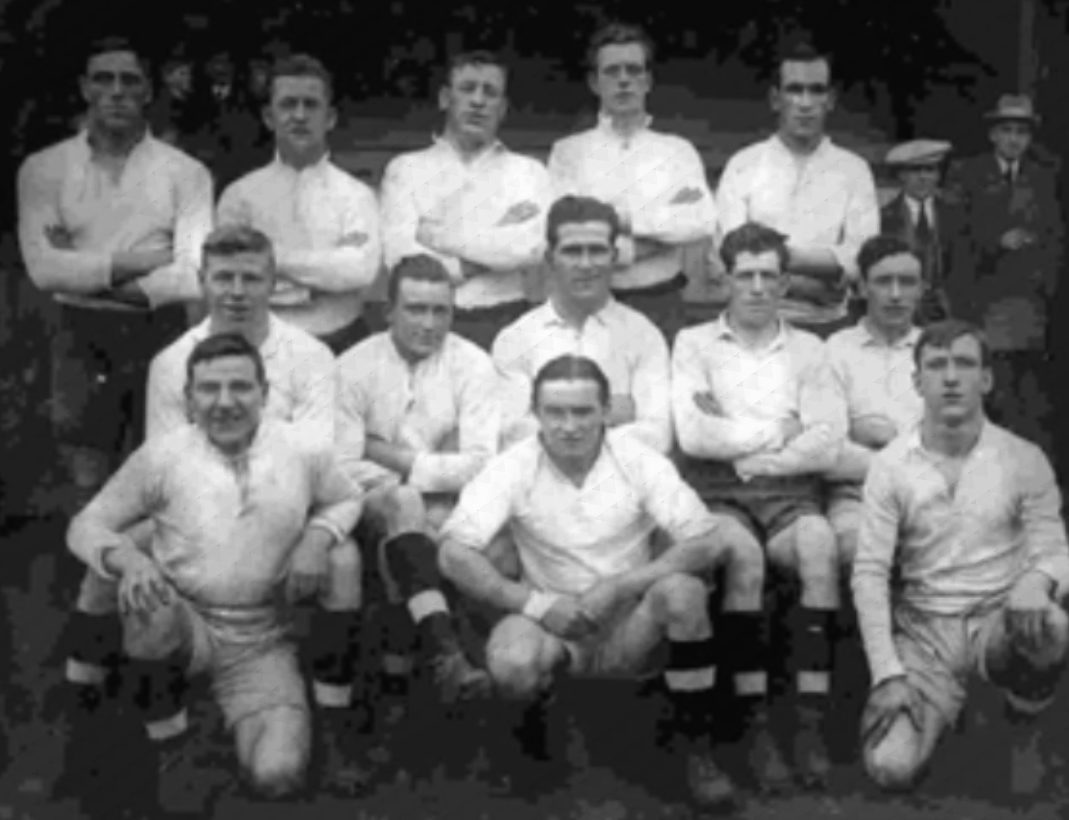 Peace time rugby recommenced in January 1919 with a short season running to April 1919. A few players continued their careers, Herbert Place continued as full back until December 1920 having made 426 appearances over 19 seasons, Bill Jukes played a few more games until November 1919, 280 games in 14 seasons, Walter Guerin (362 in 15 seasons and is centre of the seated row in the photo) and Fred Smith, our 2 times Lion, who called it a day in October 1919 after 272 games.

John Smales , Joseph Mitchell, William Fowler, and Arthur Newton were others who continued and finished with well over 150 appearances each.

Only 2 players of note made their debuts in this season, George Bennett, who went on to play 116 games as a forward and who was also a professional boxer. He is 1st left back row in the photo.

James Selby made 61 appearances. He did play 1 friendly game in WW1 but was on active duty with the 27th West Yorkshire Regiment throughout the war.

Hunslet finished in 22nd place, their lowest position since the formation of the Northern Union.

The first full post war season was 1919/20. 25 players made their debuts. Many were trialists from the reserves but 3 players stand out.

First up in November was Herbert “Hector” Crowther, a forward destined to become a Hunslet legend, playing 464 matches with 106 tries and 15 goals. He played in 2 Yorkshire Cup and 1 Challenge Cup finals and was a regular Yorkshire representative over 7 seasons but surprisingly only played in 2 internationals, once for Great  Britain against the Aussies and one game for England.

He was followed 2 weeks later by Jimmy “Titch” Brogden, Jimmy played in 156 games over 9 seasons primarily as a half back

March saw the debut of Joe Band who went on to play 222 times as a forward.

Again a finish of 22nd was all that could be achieved in the league but slowly the foundations were appearing for the team which would take Hunslet into their next glorious era.

As a footnote to illustrate the difficulty with Heritage Lists, we have recently come across a player who wasn’t previously included. In 1917 we travelled to Barrow a man short and Barrow lent us a man called E. Douglas to make up our numbers. The Yorkshire Post match report doesn’t include him but a look through the online British Newspaper Archive turned up a report from a Lancashire paper which included him in their team line up and described the circumstances of his appearance.

Another check of the Leeds papers and I found that the Leeds Mercury report mentioned him. So welcome Mr Douglas, you’re now included as number 497.

We currently have around 250 positions from the early years and WW2 where players are not confirmed and work continues.