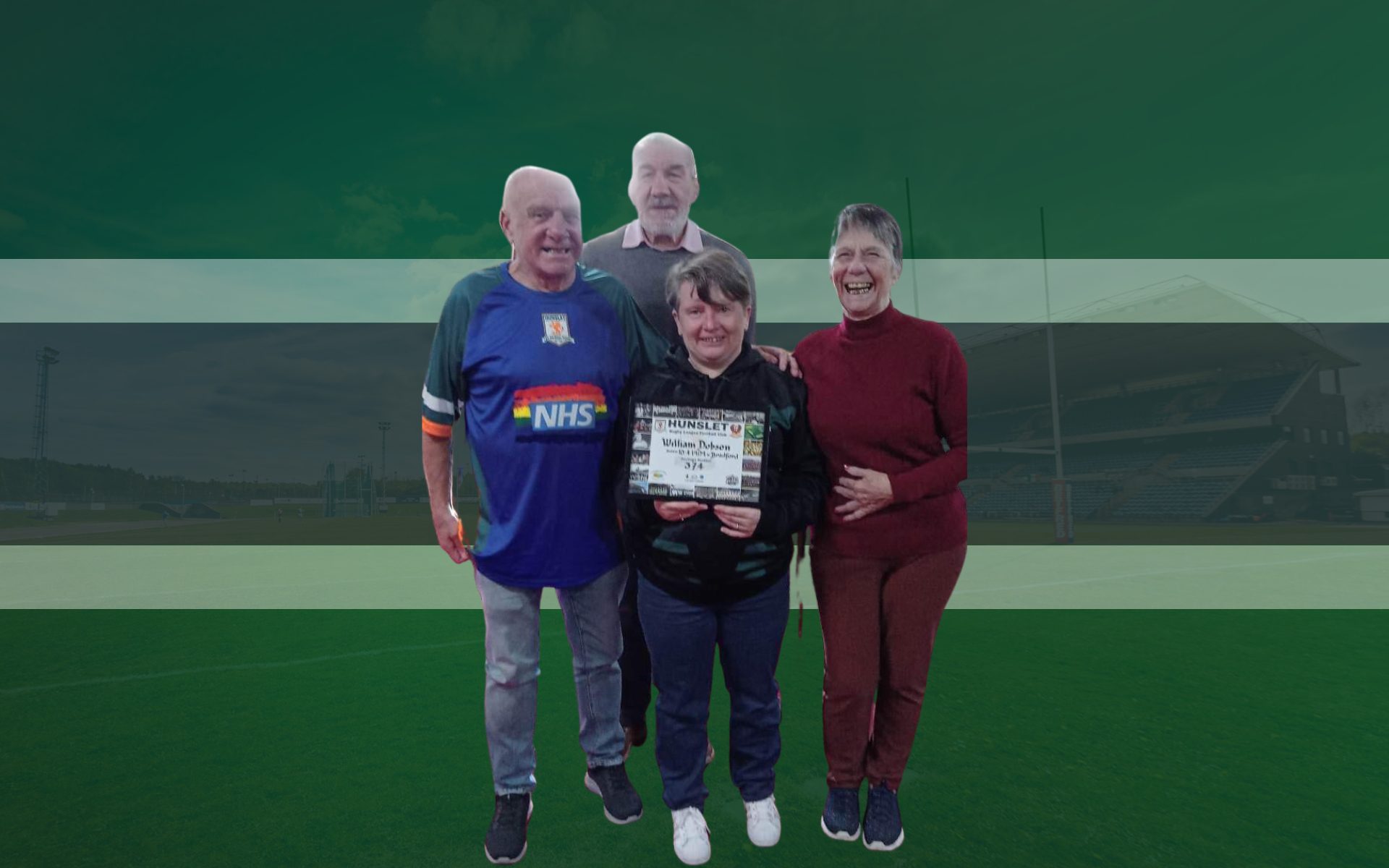 The last Friday Breakfast Club of November had special visitors when the descendants of a Hunslet player travelled from sunny Spain, smashing Scarborough and lovely Leeds to receive his Heritage Certificate writes Pat Benatmane.

William Dobson’s grandson Peter, granddaughter Pat, and great granddaughter Amanda all came along to hear how proud the Hunslet family is of our players.

April was a significant month for William Dobson, a handsome, strapping young man of 20 years, as on 10 April, 1909 he made his debut for Hunslet against Bradford Northern. We know he must have had upper body strength as he was a blacksmith’s striker, working in Hunslet, probably in a forge on Balm Road. As a striker, he would be wielding a sledgehammer onto the hot metal, beating it into shape where the blacksmith needed.

We know he was a forward in the Hunslet pack and when we showed the family a team photo of the time, the man we thought was William clearly was a bit too weedy to be him. Comparing the remaining two men we weren’t sure about on the photo, Pat’s exclamation that one looked just like her dad and he had the same nose as Peter and hairline of Amanda helped confirm which was William in the team. This was the first time they’d seen what William looked like.

William played for Hunslet’s first team seven times over three seasons, scoring a try. This was just after Hunslet had won All Four Cups so competition for places would have been fierce as Hunslet would have had the pick of the bunch. William carried on until his last first team appearance on 18 April 1914 against St Helens.

August 1914, war was declared on Germany; the war which was ‘the war to end all wars’ and the one to be ‘over by Christmas.’ William enlisted in September in the West Yorkshire, Prince of Wales Own, 12th Battalion, becoming Private 13841. This was the Leeds Rifles, Peter had discovered, and William probably went for training at Scarborough. The Rifles had marched through the centre of Leeds just before the outbreak so probably looked glamorous in their uniforms with their rifles, marching off to see the world.

William left behind his dad, Thomas, and mam, Mary Ann, in 15 Back Dent Street, off Easy Road, and his pregnant wife, Ivy, and two children. Sadly, William was never to see his unborn baby, as on 3 April, 1916, he was killed in action. British troops had been sent to fight until the Canadian army arrived. At St Eloi on the Somme where William was, tunnels had been dug under the German lines, explosives placed and three great craters were created when the explosives were detonated.

The British had to advance through the rain and mud-filled mess to reach German lines. Many were shot dead, or drowned in the mud before they could be rescued or could crawl out of the deep craters. The Canadians arrived on 4 April and a soldier described the scene. “When day broke, the sights that met our gaze were so horrible and ghastly that they beggar description. Heads, arms and legs were protruding from the mud… and dear knows how many bodies the earth swallowed. Thirty corpses were at least showing in the crater and beneath its clayey waters other victims must be lying killed and drowned.’ Poor William’s body has never been found. His memorial is on the Menin Gate, along with 54,000+ other soldiers.

However the Hunslet family, not knowing that his descendants are still fans, contributed to a special commemoration around the Lochnagar Crater on the Somme. On the walkway we have 10 small plaques in a row and William Dobson’s name and details are on one. The Lochnagar Crater was created by the largest explosion from tunnelling when the Battle of the Somme began in 1916. It was bought by Englishman Richard Dunning to be a lasting peace and reconciliation memorial. Other craters have been filled in.

William Dobson, Heritage number 374, may have no grave, but Hunslet remembers him. 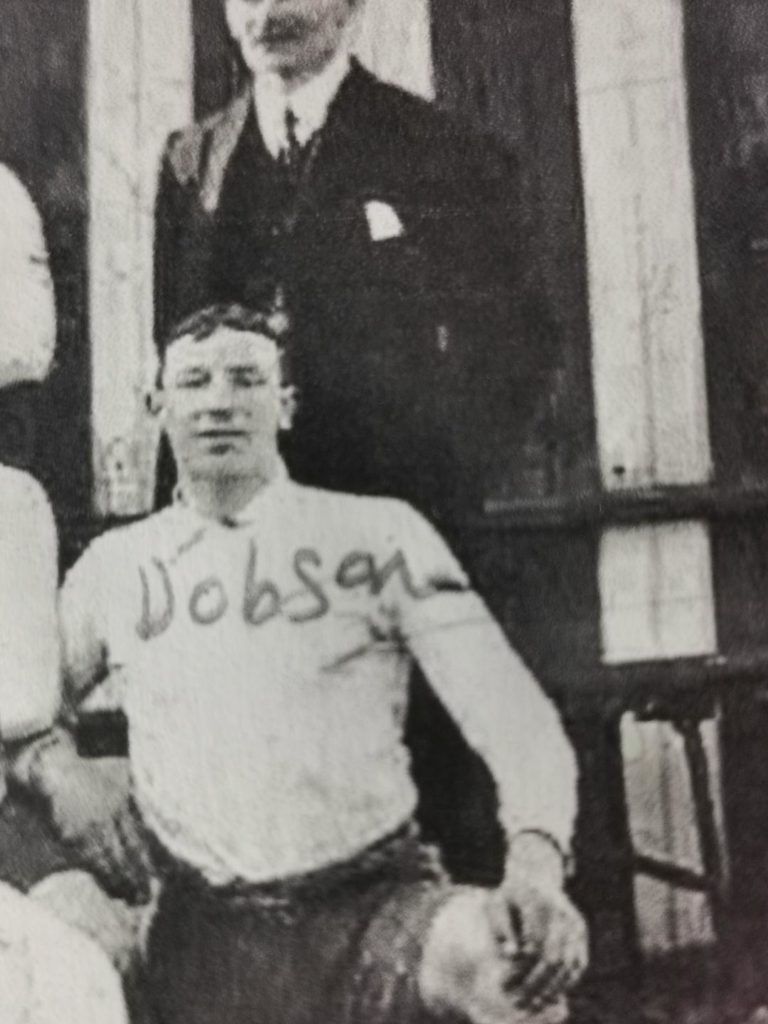 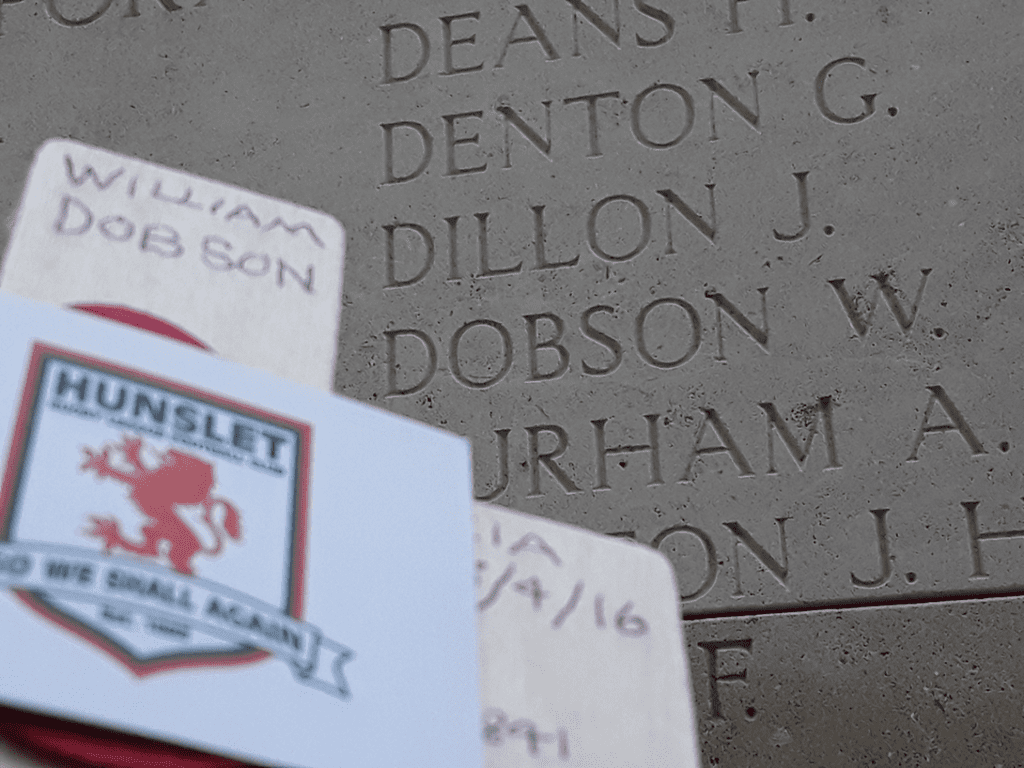 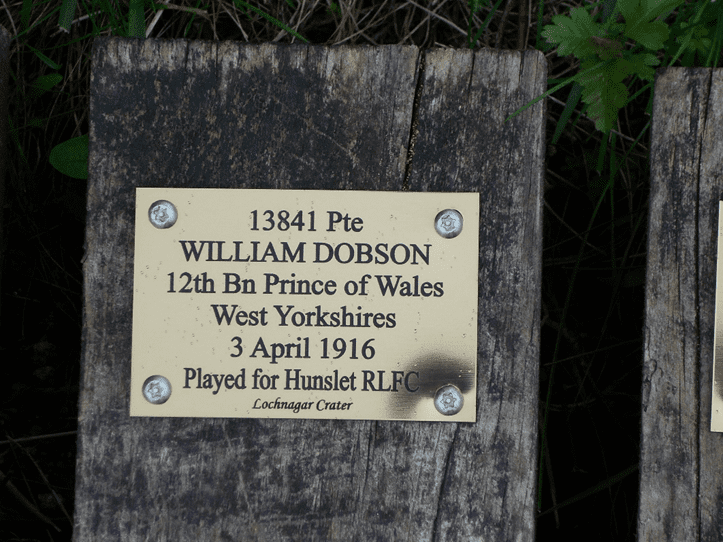