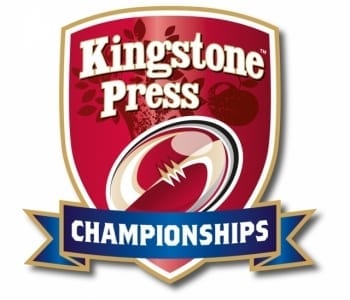 Gaskell, who pipped Leigh Centurions half-back Ryan Brierley and Halifax captain Scott Murrell to the coveted award, has been a key performer for the Bulls in spearheading their charge to the Qualifiers as they aim for a swift return to the First Utility Super League.

The 24-year-old received his award at the Kingstone Press Championship and League 1 Awards Dinner held at the Midland Hotel, Manchester, where many of the other stars of the 2015 season were honoured.

Halifax coach Richard Marshall beat Paul Rowley of Leigh and Whitehaven’s James Coyle to the Kingstone Press Championship Coach of the Year award – capping off a remarkable first season for the ex-England Academy coach, who masterminded a nine-match winning run to secure a Qualifiers berth.

Baldwinson, a former England Academy player, has been a permanent feature in the Featherstone team this year.

Kingstone Press League 1 Player of the Year and Coach of the Year awards were scooped by Oldham’s Lewis Palfrey and Scott Naylor respectively, a reward for the club’s achievement in finishing top of the table.

Matty Beharrell went one better this year as he was named the Kingstone Press League 1 Young Player of the Year, fending off strong competition from York City Knights’ Greg Minikin and Ben White of Swinton Lions.

Beharrell, who was shortlisted for the award in 2014, has been a solid acquisition for coach Stanley Gene since arriving from Hull Kingston Rovers last season.

The Kingstone Press Championship and League 1 Clubs of the Year awards were awarded to Dewsbury Ram and Keighley Cougars, respectively.

Bradford Bulls and Coventry Bears were the inaugural winners of the Project of the Year award for the Championship and League 1.  The Project of the Year award recognises clubs who have shown an outstanding commitment to meeting the objectives of raising the visibility and prolife of the competition and increasing attendance at one or more games through a special project.

The Leigh Community Trust was named Foundation of the Year in recognition of the trust’s commitment to developing Rugby League in the Leigh area throughout 2015.

In a new award sponsored by Supporters Direct, Laura Dimberline was named as 2015 Community Champion. Laura is the manager of West Leeds Under-13s, coaching and mentoring a young team which has blossomed under her care.

The 2015 Kingstone Press Championship and League 1 award winners in full are as follows: