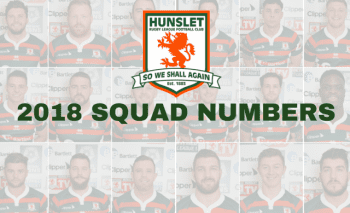 Hunslet RLFC have today revealed their first team squad numbers for the 2018 Betfred League 1 season. Gary Thornton has named a thirty man squad, with a number of our new signings awarded squad numbers within the one to seventeen positions.

Former Sheffield Eagles star Duane Straugheir has been given the number twelve shirt with the returning Danny Grimshaw been awarded the number three shirt.

Some noticeable changes to the squad numbers see Joel Gibson move from number eighteen to number five after a good first season at the Club. Matt Nicholson is rewarded for a solid League 1 shield campaign with the number thirteen shirt, which sees Liam Mackay take the number eleven shirt.

Club stalwart Jimmy Watson retains the number one jersey with young half back Joe Sanderson been rewarded for a great first season at the club by keeping the number six shirt.

GT commented “George has been loyal to Hunslet for a number of seasons and is a really popular and well respected member of the squad.

“Geroge has great leadership qualities on and off the field and the guys look up to him.

“He has great experience at this level and is always helping the young guys in training and during games.

“He is really enthusiastic about next season and that rubs off on his team mates. George puts his heart and soul into every game he plays.

“He’s the type of player the opposition hate to play against, but love to have on your side.”

On the announcement of Duane as joint Club Captain, GT said “Since Straff came into the club he has had an immediate effect on the place.

“He is experienced at a higher level and been at some good clubs and in some good environments.

“Straff is very professional in everything he does and is well respected within the game.

“He is a knowledgeable bloke and will be a perfect ally for George. With George playing an impact game mostly off the bench, Straff will give us the leadership and guidance we need on the field from the start.

“Having the two of them in a Joint role will allow them to share the responsibility and work with each other for the benefit of the team.”