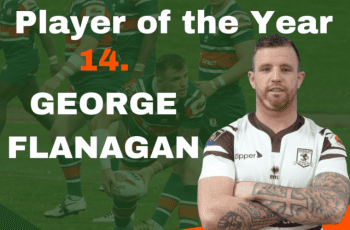 After showing a superbly put together season highlights video, Gary Thornton gave a season review reflecting on the season in terms of both the highs and lows. GT then went on to talk about his and the clubs plans for 2018.

The evening’s presentations then began.

Liam Mackay won the Joan and Ronnie Fletcher award with George Flanagan picking up Top Try Scorer of the Season award after an impressive 26 tries.

Club Person of the Year went to long serving supporter Jack Bedford, great recognition for Jack who has supported the club since the early 1930’s.