Bailey & Clarkson to feature for Hawks on Sunday 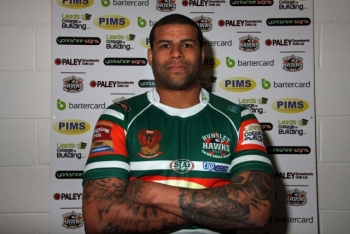 Bailey’s most recent appearance for the Rhinos was a try scoring one against Widnes in a comprehensive victory just 2 weeks ago at Headingley.

Second Row Clarkson has appeared in four of the Rhinos 6 Super League games so far this season and will make his second appearance for the club following 1 appearance also on dual registration in 2013.

Director of Rugby Darren Williams said “We’ve resisted the temptation to utilise dual registration so far in 2014 but our injury list is horrendous at present and it’s starting to cause some concern. We always said that with a large squad our own players would get first shot at opportunities this year, but we now have Liam Hood, George Clarke, James Coyle, Michael Haley, Aston Wilson, Thomas Coyle & Lee Brickwood out for a number of weeks, some of these long term and with remaining doubts over the availability of Lee Mapals & Andy Ballard for this weekend’s fixture with London Skolars we urgently needed to bring in some troops, we even had to cancel Tuesday’s training session due to the low numbers of players fit enough to be able to train.”

Williams added “Looking at the Skolars recent form and their forward pack in particular is what their game is based around, they have some size and aggression in Ryan MacDonald, Dave Williams & Lamont Bryan along with pace and good line runners at the back of the scrum in Michael Worrincy and ex Toulouse forward Patelisio Pelo, so to be able to include the calibre of players such as Bailey & Clarkson when we need them most is what dual registration and indeed our whole partnership with the Rhinos is based upon.