Barrow have too much for Hunslet RLFC 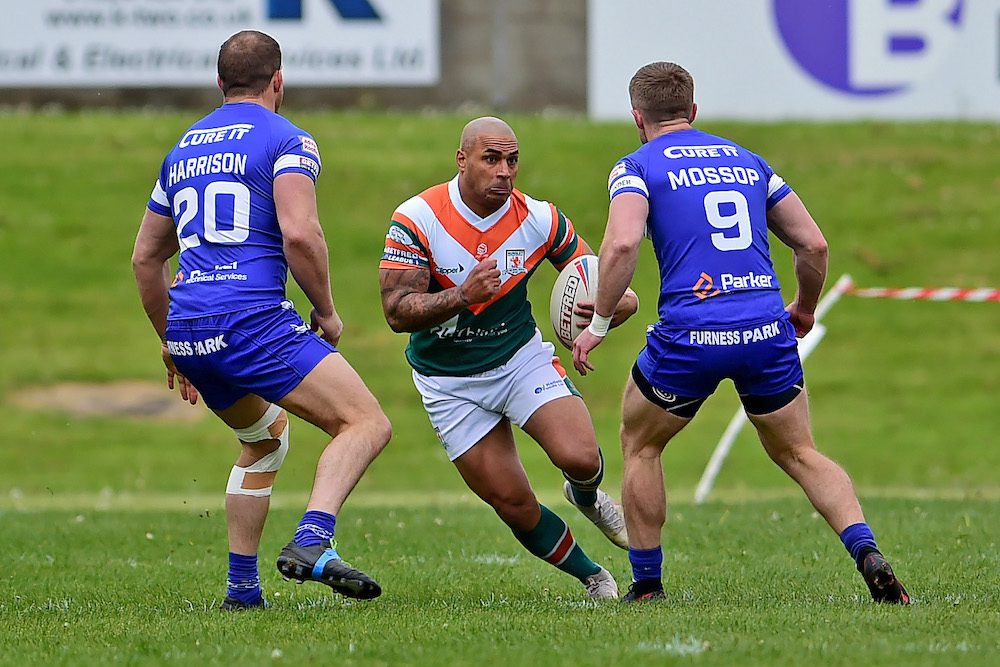 Hunslet lost their second Betfred League 1 home game of the season against Cumbrian opposition today (23 May 2021) at the South Leeds Stadium, when Barrow Raiders took the points after a hard fought and close match.

Again the game turned on a Hunslet disallowed try on the hour mark when Barrow misfielded a kick and George Senior gathered to feed Wayne Reittie who looked to have scored in the corner, but was adjudged to have knocked on.

The knock on was costly as Barrow soon edged in front and never looked like losing from that moment on.

The first half was a tense defensive affair, with both teams trying to arm wrestle each other into submission. Both Ashton and Hartley had gone close for the Parksiders, but constant mistakes invited the visitors onto Hunslet’s line.

Barrow knocked on with the line gaping, before Hey went close for Hunslet. But an injury to influential Barrow centre Harkim Miloudi seemed to spur Hunslet on, and they opened the scoring on 38 minutes when a great ball from Dom Brambani sent Tommy Ashton close enough to reach over and score.

At 6-0 it looked like an enjoyable half time cuppa, but with plenty of added time Jake Carter threw an outrageous dummy to score and we were all square at the break. 6-6.

At times this game was more like a boxing match, with both teams’ forwards slugging it out to gain an advantage (Man of the Match Harry Kidd and Alex Rowe were excellent for Hunslet), but the handling left something to be desired, both teams coughing up plenty of possession.

The game took a turn on 50 minutes when a blatant punch on Brambani was missed by the referee (placed on report) and soon after Reittie’s missed chance Barrow lay siege to Hunslet’s line.

Hartley had made a great try saving tackle, but on the hour mark Jamie Dallimore ghosted over (despite a possible obstruction), then converted his own try to nudge Barrow in front 6-12.

Five minutes later a Barrow kick seemed not to trouble the Hunslet defence until a speedy Ritson came from nowhere to claim a try 6-18.

By now Hunslet were spent and a second Ritson try (from a Hunslet dropped ball) with a Ryan Johnston score in between put the game well and truly to bed at Hunslet 6 Barrow 28.

Jamie Dallimore rubbed salt in the wound with a drop goal in the dying moments, before turning and celebrating to the Hunslet faithful. It had been a dominant last quarter from the Cumbrians, but Hunslet will be disappointed they didn’t take advantage when on top.

A tough looking trip to Keighley next week (30 May) may get Hunslet back on track, but they will need to be on top form. They may be boosted by their supporters effort in running, walking and cycling to Cougar Park to raise money for Rob Burrow and MND (Motor Neurone Disease) and SITraN (Sheffield Institute for Translational Neuroscience).