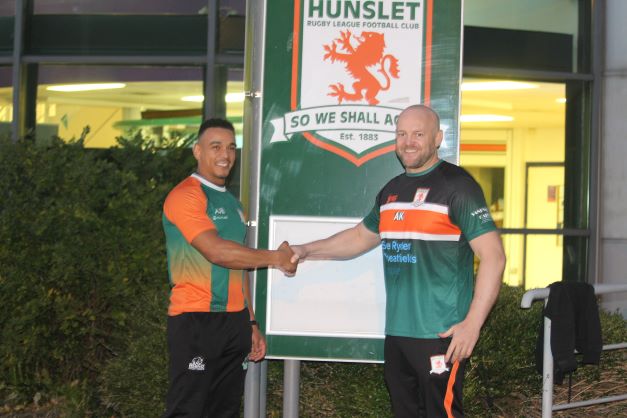 Jamaican international Aaron Jones-Bishop never thought for a second about looking elsewhere before re-signing for Hunslet on a twelve-months deal.

Bish, 31, won’t easily forget the way the club stood his corner when he was sent off for alleged biting in the Betfred League 1 fixture at Rochdale Hornets back in July. The flying winger was subsequently suspended for eight games by the Rugby Football League.

The club resolutely stood Jones-Bishop’s corner, but the ban stood. Bish reflects: “I missed the end of the season, including the promotion play-off defeat at Doncaster, and I was also unavailable for selection for Jamaica’s two recent matches with England Knights and Scotland.

“That was hard to take, but there was nothing anyone could do about it, and it certainly wasn’t for the want of trying on Hunslet’s part, with General Manager Chris Chatten in particular in regular contact. So I really wanted to stay loyal to the cause – not that I’d have felt any different, in truth, regardless of my ban. I’ve really enjoyed being at Hunslet, there’s a good crack here, and I love playing at the South Leeds Stadium. The pitch is one I’ve always enjoyed myself on, being very well maintained and wide, going right back to when I turned out for Leeds Building College a good few years ago.”

Bish lives and works only ten-to-fifteen minutes away from the ground, which also helps, while he’s been invigorated by the number of talented young players astute head coach Alan Kilshaw has been snapping up in recent weeks.

He says: “We’ve been making some good signings and I was delighted when experienced players such a Wayne Reittie, Jimmy Watson and Duane Straugheir announced they were remaining at the South Leeds Stadium.

“As a senior player myself – I’ll be 32 in January – I’m looking forward to helping point the younger lads in the right direction, in addition to repaying the faith Hunslet showed in me.

“My hope this year is that we go one better than we did last season, when we started slowly but still hit the play-offs. If we’d done better in the early weeks of the campaign we may well have finished top of the league and been promoted automatically. As it was we finished sixth, but the fact that we won comfortably at Workington (who subsequently snared the second promotion spot) in our last league game illustrates what might have been.

“So we need to start strongly next year. We’ll benefit from a full pre-season, with lots of young lads on board, and I’m sure we’ll rebuild the strong team spirit we had last year.”

Bish concludes: “I’ll also have a personal eye on the World Cup, and on impressing the Jamaica selectors, but first and foremost I need to focus on the job in hand with Hunslet. If I do the little things right for the Parksiders, on and off the field, the bigger picture can take care of itself.”

Kilshaw says: “We have unfinished business with AJB. He worked hard to earn the right for an opportunity at the back end of last season and for well documented reasons he couldn’t progress.

“I feel with a good pre-season under his belt he could be a key member of our backline. He can cover centre, wing and fullback and he knows that a big season for us will enhance his World Cup opportunities. He’s hungry for a good campaign and that’s the type of trait we want in the squad next year.”