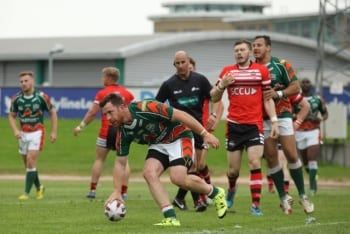 Hunslet RLFC are delighted to announce that Club Captain Liam Mackay has signed a 12-month contract extension keeping him at the South Leeds Stadium for the 2017 season.

Liam is a 25 year old back row / loose forward who joined the club from Featherstone Rovers in December 2013. He has signed a one year contract extension following an impressive season in the Championship in 2015 in which he made 25 appearances scoring 5 tries.

Liam’s 2016 campaign was severely hampered when he missed the end of the regular season and the Super 8s due to sustaining a serious shoulder injury which required surgery.

Liam who is sponsored by Jane & Fred Hopkins was part of our 2014 Grand Final winning team. He has made 62 appearances for the club scoring 17 tries.

Liam commented “I’m delighted to sign for another season, the staff make it feel like home from home & after speaking to some of the boys who are staying for 2017 it was an easy decision to make.

Director of Rugby Darren Williams said “Liam is the ultimate professional and although he missed a large part of the 2016 season following surgery he has worked extremely hard on his rehabilitation and is on course to resume full training ahead of his expected return around December.

“We certainly missed his effort and work rate in his absence and he is a key component in what we want to achieve in 2017.”