Coventry and Mackay re-sign for 2018 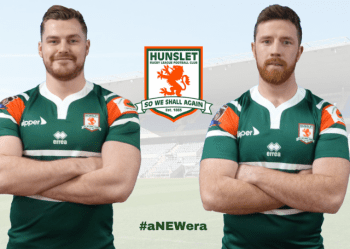 Jack, 22, is powerhouse prop forward who joined the club from Featherstone Rovers in 2017 after a successful loan spell at the club in 2016. He was a regular feature in the Parksiders team in 2017 making 17 appearances and scoring 3 tries.

Liam, 25, has been with the club since 2013 signing from Featherstone Rovers. Liam has been main stay in the Hunslet pack over the last 5 years and has been a consistent performer over his time at the club. He was rewarded by being made joint club captain in 2016 and followed that up by having a great season in 2017 scoring 11 tries in 23 appearances.

Gary Thornton was delighted to keep hold of two important players; “It is really important to retain some stability in the squad as well as bringing in new signings, so re-signing Jack and Liam was high on our list.

“Both had decent seasons last year and we decided early on that we wanted to retain their services.

“Jack is developing really well as a young front rower with a terrific attitude to training and playing.

“He is still learning his trade at this level, and has a willingness to learn and develop.

“He will benefit from training with, and playing alongside some of the quality players we have brought in, and I’m urging Jack to work hard in pre-season and kick on in 2018 and really establish himself in the squad.

“Liam is established at this level, and has been an integral part of the Hunslet team for a few seasons now.

“We need his experience and professionalism at the club – he’s a very intelligent player with a great knowledge of the game, and is very well respected within the group and within the game.

“He has terrific leadership qualities too, and will be an important and integral part of what we want to achieve next season.

“Although primarily Liam is a back rower, he also has some utility value too, and can cover loose forward, centre and hooker equally well.”

Jack Coventry was delighted to have re-signed for another 12–months; “I am really pleased to have signed again for this year. I enjoyed my first full season with the club and was pleased we managed to finish it on a high with the shield win.

“I gained some valuable experience from more experienced forwards in the squad and i felt it improved my game massively throughout the year.

“I am looking forward to a big pre-season and the new challenges that lie ahead in 2018.We want to push for promotion and to give our outstanding fans something to cheer about.”

Liam was equally pleased to be staying on at the South Leeds Stadium; “I’m glad to have signed for another year. I’m really looking forward to having a positive 2018 season under the guidance of GT (Gary Thornton) and having a big push for promotion.

“Hopefully we can give something back to the loyal set of fans we have at Hunslet.”